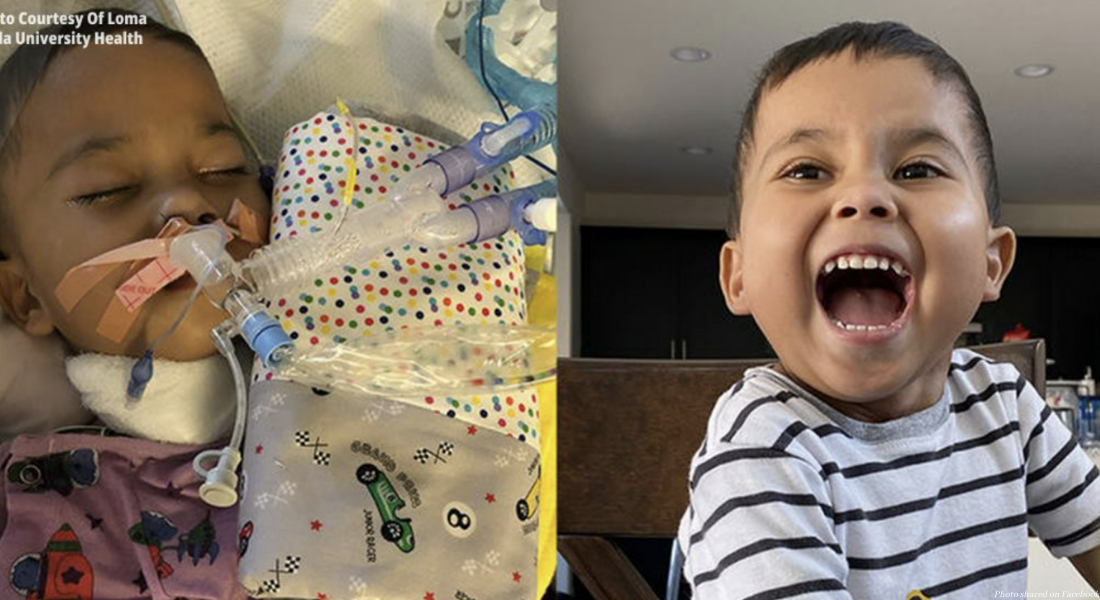 A three-year-old boy with a rare birth defect is finally able to breathe on his own and is learning to speak now, too. His journey to recovery began in the womb and has continued with expert surgeons who worked to reconstruct his windpipe so his tracheotomy tube could be removed.

Jethro Quach was diagnosed with congenital high airway obstruction syndrome (CHAOS) before he was born, at just 21 weeks gestation. It’s an extremely rare condition, with less than 50 cases recorded in the United States. After a fetal echocardiogram, doctors realized he had tissue blocking his trachea, just below the vocal cords, which would mean he couldn’t breathe at birth. His parents were devastated.

David and Jennifer Quach had a long journey to build the family they longed for. “We were ready to start a family right away,” Jennifer said in a press release for Linda Loma University Health, explaining that conceiving Jethro was a miracle for them. “We prayed and prayed for him.”

But the diagnosis of CHAOS meant another scary step: an in-utero surgery at 24 weeks, when Jethro was the size of a cantaloupe.

Dr. Ciprian Gheorghe, a physician at the maternal-fetal medicine center at Loma Linda University Children’s Hospital (LLUCH), said they had initially hoped Jethro’s condition would self-resolve. “Unfortunately, in Jethro’s case, he required a fetal surgery and another at birth,” Dr. Gheorghe said.

The team began by using a laser to make a small incision into Jennifer’s abdomen. From there, they drained fluid from his lungs, allowing them to develop properly and prevent any damage to his brain or heart. But the hardest part was yet to come; doctors would perform an ex utero intrapartum treatment, or EXIT procedure, at birth. It’s a procedure so rare that this was only the second time it had ever been performed at LLUCH.

During an EXIT procedure, doctors perform a c-section but leave the lower part of the baby’s body inside his mother’s womb, still connected to his mother’s placenta. This allows him to continue receiving oxygen, preventing any possible brain damage while doctors operate. In Jethro’s case, doctors performed a tracheotomy, inserting a tube into his throat to ensure he could breathe. He was discharged from the NICU at six weeks old, with the tube helping him to breathe.

Now, at three, Jethro is able to breathe on his own, thanks to a groundbreaking surgery performed earlier this summer. Tsung Ju O-Lee is the doctor who operated on Jethro this time, as a surgeon who specializes in complex pediatric otolaryngology was exactly who the Quach family needed. In another press release, O-Lee explained how they made it possible for Jethro to breathe on his own.

“We performed a laryngotracheal reconstruction by taking two pieces of cartilage from his rib and attaching them to the front and back of his airway,” O-Lee said. “Essentially, we used the ribs to build his voice box and help it stay open. Once the reconstruction was in place, we were able to take out the tracheotomy tube.”

By the end of July, Jethro was eating and breathing on his own. He’ll continue receiving therapy and checking in with doctors over the next year, but if things remain stable after a year, he’ll be in the clear. And Jethro is already wowing his medical team and exceeding their expectations.

“His voice box was congenitally narrowed down,” O-Lee said. “While he’s fluent in sign language, Jethro had no voice these past years. After reconstruction, I wasn’t sure he would have a voice because his vocal cords are so small, but he’s making noises and talking. We’re so happy about that development.”