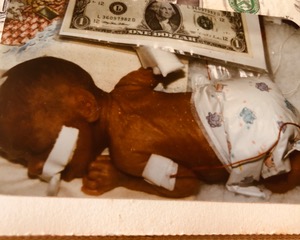 It was breath by breath when Simon Joel Hagman was born in 1996 at just 22 weeks gestation, premature and weighing only one pound. He was born fully formed, all 10 fingers and toes, but he needed a lot of help to breathe. This kept him in the hospital for 2 years, as we fought for his life…God by our side.

During my pregnancy, I had placenta previa and was placed on bed rest. My placenta was detaching from the wall of my uterus, which eventually made me go into labor early. When Simon was born, the doctors fought hard to save him. In fact, I never came across a doctor who did not want to fight for his life, no matter how small he was or how small his chances of survival may have seemed. I think most doctors are that way…or they would not do what they do! 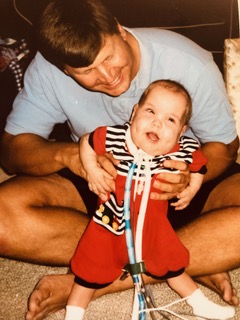 Simon during his time in the hospital. Photo courtesy of Tracey Hagman.

The atmosphere at Mpls Children’s Hospital was amazing and there were so many premature children including micro premies that they were trying to save. Funny to me because Mpls is so liberal in how it votes on issues like abortion. The hospital was wonderful. Especially Dr. Ron Hoekstra, the Christian neonatologist, who worked closely with Simon. He prayed with us a lot and spoke life over Simon, not death. We always spoke life over him!

Simon, too, battled for his life and we came out of the hospital triumphant, as we had been through a war—a war for life. We each had battle wounds and scars but they were badges of honor, not defeat. 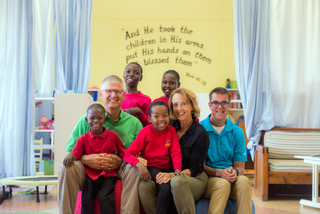 The family with children they serve through their ministry. Photo courtesy of Tracey Hagman.

In 2002, when our older son Sam was eight and Simon was five, we packed up our family of four and moved to Nairobi, Kenya to became missionaries. Fast forward to 2019 and we are still in Kenya where we have founded and run a center for children with special needs and their mothers in the slums of Nairobi. It is called Heshima, which means “dignity” in Swahili.

READ: Celebrities tell the stories of their premature babies for World Prematurity Day

At Heshima, we work to give families touched by disabilities a chance to access therapy, special education, and medical intervention. Simon, now 22, is our Heshima pastor and does ministry with our 50-plus families on the Heshima campus. 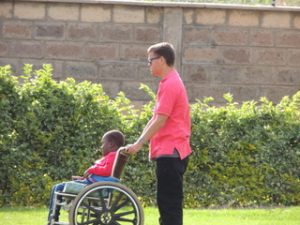 Simon and a boy at the ministry. Photo courtesy of Tracey Hagman.

If we had not “gone to war” for Simon’s life after his premature birth, Heshima would never have happened. Life is precious and we are all made in God’s image. Every child at Heshima is just a “breath” but each breath is life…a precious life. Simon agrees.