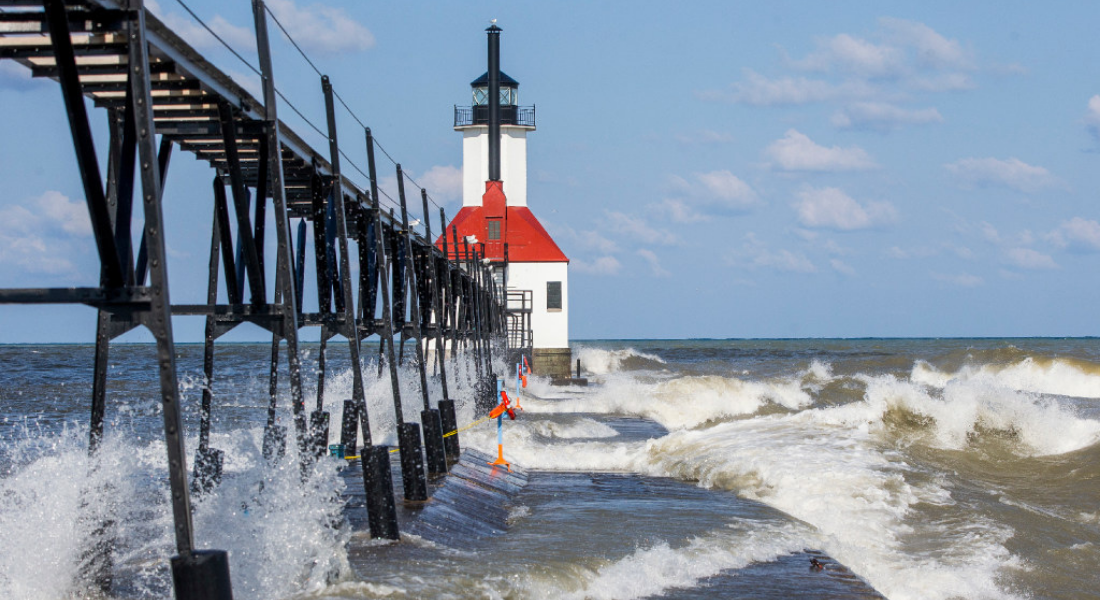 It was supposed to be a normal day at the Lake Michigan beach for Alyssa DeWitt and her children, but the fun day out quickly turned terrifying. But DeWitt, who is five months pregnant, ended up saving the lives of three children from drowning, and she’s now being called a hero.

DeWitt wrote on her Facebook page that she originally hadn’t wanted to go to the beach at all, because it had been so windy that day. “[S]omething told me to go, so we did,” she wrote. “Today, I took the kids to the pier side of the beach. We NEVER go to this side. Ever. Today, I felt that this side was best, for whatever reason. You can’t tell me it was ‘luck’ I was there when I was. I was meant to be there… and I’m so sooo thankful for it.”

While she and her kids were on the beach, DeWitt noticed pairs of hands waving frantically from the water, and she immediately jumped into action. Making sure to first get her kids safely out of the water, DeWitt ran onto the pier and called 911. Two children had been swimming near the First Street Beach pier when the water began to overpower them, and when a third older child went out to help them, all three — who were under the age of 15 — were caught in a rip current and were being pulled further away from shore. According to DeWitt, the current was so strong that they were being slammed against the pier wall, and there was no one else around that could help.

“I don’t think that they could hear me. I couldn’t hear them,” DeWitt told UpNorthLive of her call to 911 for help. “The best I could do was scream into the phone we needed help — there were kids drowning.”

She knew she had to do something, so she gave up on waiting for 911 to send someone else to help. “I put my phone down with 911 on and laid down over the side of the pier and told them what to do, reach for my hand. Every time I would get them part way up a wave would smash them back down,” she said. “This part will stick with me forever. This girl looked at me and said, ‘I’m going to die.’ It makes me cry every time I think about it. I said ‘I promise you. I am not going to let you die out here. I will get you out of this water.’”

And miraculously, DeWitt did. She saved all three.

“[T]he adrenaline kicked into high gear and somehow I did it,” she wrote on Facebook. “I pulled them up the pier wall, with the waves slamming into me and throwing the kids all over the place, pulling with all my might on wet slippery hands, and almost going over the edge myself a few times. I kept my promise, I was going to do whatever I had to do.”

Not long after DeWitt got all three children to safety, Manistee Police arrived. And Josh Glass, the Manistee City Police chief, didn’t downplay her bravery. “We all think we’ll do this, but it’s very difficult when you’re faced (with that) situation. By all accounts this person did not hesitate to put her safety aside and we are extremely thankful for that,” he said in an interview with the Manistee News Advocate. “She’s a hero.”

Afterwards, everyone — DeWitt and the children — had only minor injuries. DeWitt went to the emergency room to make sure her baby was okay, and everyone survived. “I’m beyond thankful I was where I was and that those kids get to live another day,” she wrote, adding. “I’m loving my babies a little harder tonight. I’m sure those parents are too. God is good.”