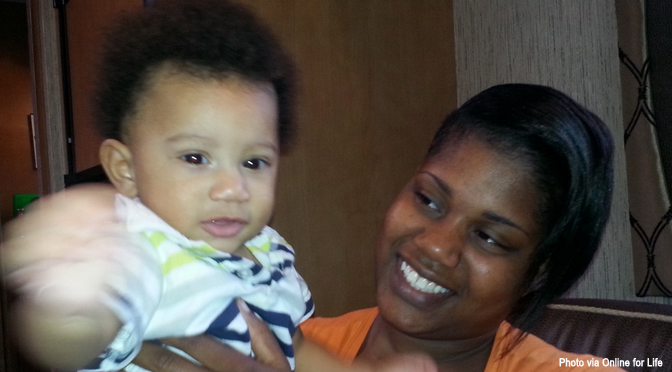 Pro-abortion groups often describe pregnancy resource center workers as liars, telling women that those who work or volunteer at these centers only care about taking away women’s choices. In reality, the people at pregnancy centers dedicate their lives to helping women face unexpected pregnancies, offering the most choices and support to women and families.

Online for Life, a website with a mission of connecting women who are seeking abortions to pro-life pregnancy centers, has played a role in saving countless lives from abortion. One such life is baby “Jediah.”

Jediah’s parents “Ryan” and “Brandy” were already raising their 6-month-old son “James” when they discovered they were expecting a second baby. As any young couple would be, Ryan and Brandy were scared. Not only had Brandy been facing unemployment for months, but Ryan had also just lost his job. They felt financially trapped.

Certain that there was no way they could support another child, Brandy searched the internet for abortion information. It was then that she found Online for Life.

Through OFL, Brandy and Ryan were connected with a pro-life pregnancy center where they met with a woman named “Cathy.”

As told to Online for Life, Ryan was inquisitive about the actual abortion procedures. When he heard what happens during an abortion and the risks involved, he knew they could not abort their baby. Brandy wholeheartedly agreed. Five months later, Jediah was born.

But the story doesn’t stop there. Ryan and Brandy and their boys have an ongoing relationship with the pro-life pregnancy center, which even helped them find affordable housing. Things also turned around for the couple financially when Ryan found a new job that allows Brandy to stay at home with her sons.

Without pro-life pregnancy resource centers like this, thousands more babies would be killed from abortion simply because their parents didn’t have the facts or anyone to support them.

Pregnancy centers offer couples like Ryan and Brandy hope, help, and continued support well after their babies are born.