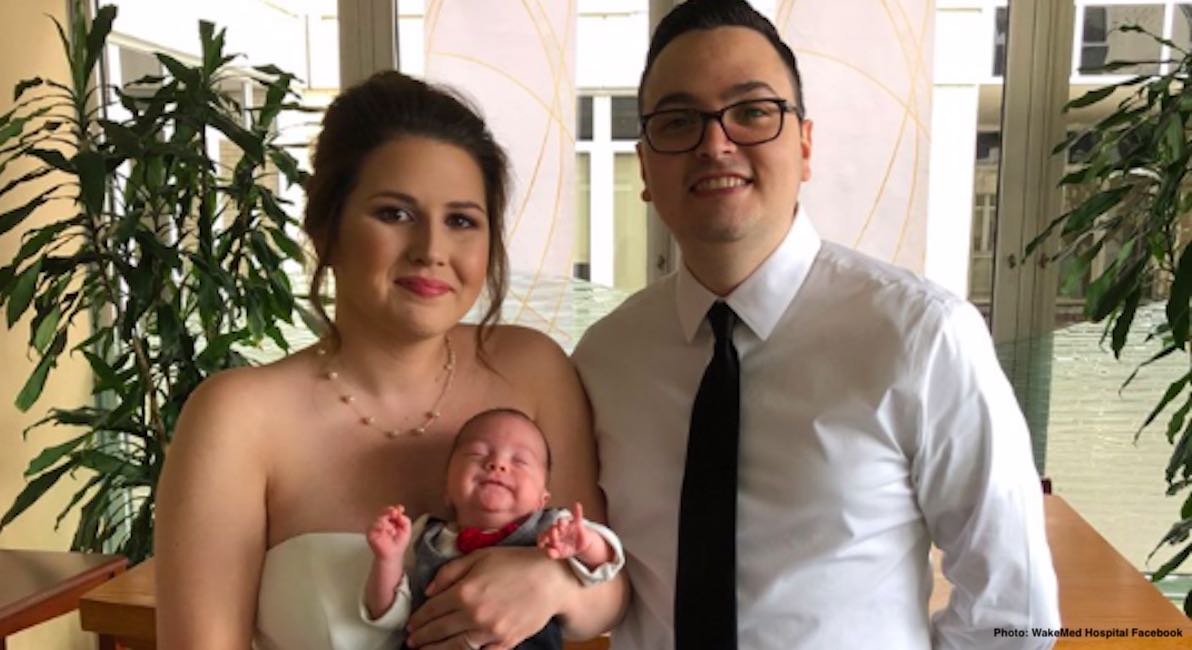 Amanda Acevedo had been planning her perfect June beach side wedding for months. But when she went into pre-term labor with her son Oliver at 30 weeks, she knew those plans were going to change.

Oliver was born on June 14th at 30 weeks, weighing just 3 pounds and 14.6 ounces. Babies born that early are rushed to the Neonatal Intensive Care Unit (NICU), and Oliver was no exception. NICU babies have very serious medical needs, and many parents want to be by their baby’s side night and day — something that also comes with a lot of stress. “It’s just hard when you think the safest place for your baby is in your arms but being a preemie that wasn’t always the case. You sometimes feel more like a visitor or [bystander] than a mother or father because the nurses have to do the medical side of his care so you just stand and watch and hope they get better,” she told Good Morning America (GMA).

Amanda and her now-husband Edwin thought they’d have a quick courthouse wedding in August, to get married while remaining as close to Oliver as possible.

But when WakeMed hospital Family Coordinator Mallory Magelli McKeown heard they were going to the courthouse one morning for their wedding, she offered the hospital’s chapel as a venue instead, so that Oliver could join in, according to GMA. To top it off, MeKeown also happens to be an ordained minister, and was able to perform the ceremony for them. 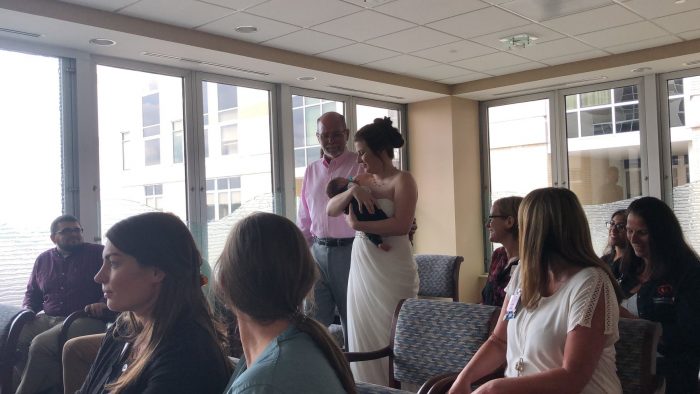 “She said she would be happy to marry us at the hospital in the chapel,” Amanda told Motherly. “Oliver’s doctor, Dr. Demeo, said he was stable enough to be unhooked from his monitors so I could carry him during the ceremony.”

McKeown did everything she could to make the day memorable for them, and together with some of the hospital nurses, they put together a lovely ceremony for Amanda. “They had planned on a 2:30 wedding at the courthouse so we held to that timeline. We have some really amazing nurses and they wanted to decorate for the wedding so I ran out and got some decorations to surprise the family with,” said McKeown.

But the sweetest thing of all: Oliver, dressed in a tiny suit and bowtie, acted as his mother’s bridal bouquet as she carried him down the aisle and exchanged vows in front of Oliver’s neonatologist and team of doctors and nurses and all who have been supporting Oliver and his family. “There was not a dry eye in the chapel, and the room was filled with love and celebration for Amanda, Edwin and Oliver,” hospital spokesperson Kristin Kelly said to People.

How sweet it is! . Amanda and Edwin Acevedo were planning to get married when Amanda went into pre-term labor. They mentioned to their nurse that they were going to the court house to get married. . Mallory Magelli McKeown, WakeMed Family Navigator, heard the news and called to suggest that they could get married here (at WakeMed Raleigh Campus) and Oliver (their son) could be at their wedding. They thought this was a great idea and came to the hospital for the celebration. . Amanda carried Oliver down the aisle as her "flowers". Their doctor, nurse practitioners, and nurses from the unit attended the celebration. . Oliver Acevedo was born at 30 weeks and 3 days — he was 3 lbs and 14.6 oz. Oliver was 37 weeks and 3 days at their wedding. Today, he now weighs 7lb 10.6 oz. Oliver wore a suit to their wedding and their nurses decorated their room to celebrate. . Mallory officiated the wedding- they had family present, and everyone celebrated them! . Congratulations to this beautiful family!! 🎉 👶🏻 #wakemed #WakeMed #WakeMedBaby #WakeMedBabies #nicubabies #family #babies #raleighnc

Oliver was nearly eight pounds at the time of the wedding, and should be well enough to go home with his mom and dad very soon, doctors told GMA.

In a Facebook post dated August 6th, Amanda thanked everyone for her wedding, and for their care and support for Oliver. “Could not have asked for a more special or memorable wedding, surrounded by family and the wonderful people taking care of my baby! Thank you WakeMed Children’s for letting Oliver be a part of our day and everything else you do❤️.”