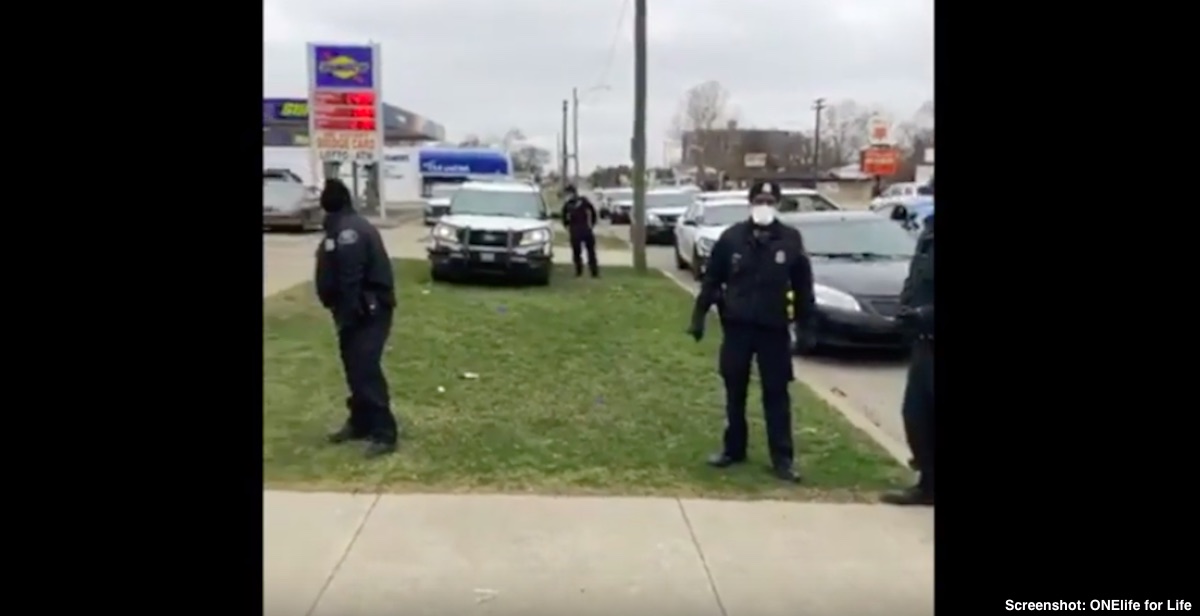 Pro-life activist Andrew Belanger was outside Scotsdale Women’s Center and Family Planning in Detroit, Michigan, on Monday when at least eight police officers arrived and attempted to order him to leave. Despite issuing a ticket, the officers eventually left the scene, and by the end of the day, twins had been saved from abortion.

Michigan Gov. Gretchen Whitmer had issued a stay-at-home order due to the coronavirus pandemic but deemed abortion businesses to be essential. The stay-at-home order allows individuals to be outside, but the officers argued that protesting was not essential and therefore not allowed. After the police arrived, Belanger was joined by fellow pro-lifers Miles O’Brien and Justin Phillips.

“We’re here for a violation of the stay-at-home order by the governor, okay?” one officer can be heard saying in the video of the incident. “This isn’t essential to be out right now. … Right now, it’s a $500 fine. If you keep this up after that, we’ll take you to jail.”

One officer claims that the abortion business is a medical facility and therefore is essential. However, no lives are being saved inside the walls of the facility — only taken, violently.

“Murdering babies in this country is essential,” Phillips said to the camera becoming emotional. “It’s an essential business that must continue no matter what. That’s the nation we live in. We as the Church [have] got to wake up.”

READ: We were arrested in North Carolina for praying outside abortion business during COVID-19

The confrontation with police continued, but as the pro-life men began to pray for the officers — some of whom bowed their heads — they each began to walk away silently, one by one. By the end of the prayer, the police had left. And at the end of the video, the men announced that twin babies were saved from abortion.

A woman named Jasmin had exited the abortion business and she showed the men the ultrasound of her twin babies. She also took their information so that she could contact them for assistance. She told them she thinks she has changed her mind.

“God opened her eyes and God softened her heart, and she came out,” Belanger said. “Amidst all of this [with the police] earlier and God continues to bring encouragement: twins. And I know I’m going to be thinking about this a lot lately.”

In the days following the incident with the police, Belanger, Phillips, and fellow pro-lifer Cal Zastrow filed a lawsuit against Whitmer and the City of Detroit seeking to “protect and vindicate fundamental constitutional rights” and “a declaration” that the police enforcement of the stay-at-home order to prevent their pro-life efforts on the sidewalks outside of an abortion business violates the First and Fourteenth Amendments. O’Brien, who was present at the incident with police at Scotsdale Women’s Center and Family Planning, is not taking part in the lawsuit.