Last year, Oklahoma City had no abortion facilities, and now it has two. Just two months ago, South Wind Women’s Center opened its doors on the south side of the city. Then, on Tuesday, Planned Parenthood opened the doors of a new medical abortion center.

The new center is located in the former office of Naresh Patel, the abortionist who was arrested and charged with a list of despicable crimes, such as giving abortion pills to women who were not pregnant, attacking women on the exam table — and dumping remains of babies illegally. While Planned Parenthood has not indicated whether it plans to also offer surgical abortions at its new facility, Patel’s office certainly was equipped for such procedures.

In July, Planned Parenthood merged its Kansas and Missouri affiliate with its central Oklahoma affiliate to form Planned Parenthood of the Great Plains (PPGP). At that time, it announced its intent to open a new facility in Oklahoma City. The opening was delayed by the process of obtaining an abortion permit, reports said. But on Tuesday, the abortion giant opened its new medication abortion facility for business.

NewsOK reports that Laura McQuade, President and CEO of PPGP, says there is a need for more Planned Parenthood services in Oklahoma:

She said Planned Parenthood’s reproductive health care services are especially critical to lower-income communities that “really have very little choice in where to go.”

Of course, if women want actual health care services, there are numerous federally funded health clinics in the state, including in Oklahoma City. 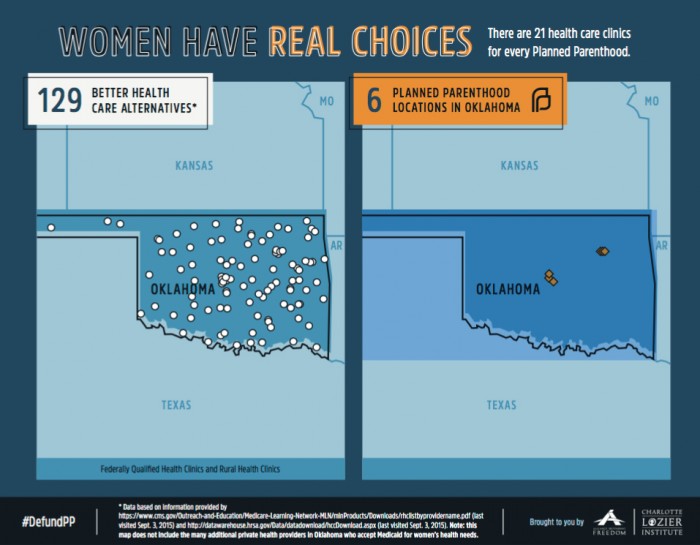 But, as KFOR reports, Planned Parenthood has its own intended audience for its abortion center:

The “full-service facaility” [sic] plans to target minorities, patients on Medicaid and other people who tend to have a difficult time securing services.

The new clinic also provides cancer screenings, annual exams and birth control, among other things, but McQuade said it’s taken months to jump through the required hoops to secure an abortion permit.

“As you can imagine, Oklahoma is not a friendly place to provide abortion services,” she said. “We have been weathering the political storms that come with the provision of abortion services that we provide, and we just feel that that is a reality in Oklahoma and we go about business of providing the care we know communities need.”

Clearly, Planned Parenthood’s new facility is primarily there to provide medication abortions, not to meet the health needs of women in the state — specially since there are many federally funded health centers to do that. Planned Parenthood’s mission is abortion, and with this new abortion center, the chain has expanded its ability to fulfill its mission, as well as offered some direct financial competition to South Wind Women’s Center.

“You can no longer hide saying that you are for women’s health,” said Sen. Treat about Planned Parenthood.

“We will continue at every stretch to protect the most vulnerable among us.”

Oklahoma is currently ranked #1 nationwide by Americans United for Life’s list of the most protective states for life.

The addition of South Wind Women’s Center and the new Planned Parenthood has doubled the number of abortion centers in the state of Oklahoma in the last year, from two to four. The other two are in Norman and Tulsa, neither of which is a Planned Parenthood.