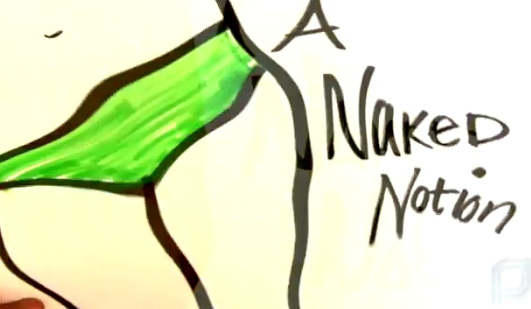 The host of a YouTube video channel called “Sex+” is teaming up with Planned Parenthood of Northern New England in PP’s latest effort to make abortion super-cool to teens.

Planned Parenthood of Northern New England is teaming up with Laci Green – best known as the host of Sex+, a YouTube video channel – for a new project called A Naked Notion. Green covers (and promotes) all areas of sex in her weekly show and on her blog, including prostitution, polyamory, fantasies, and abortion. The 22-year-old Green, who has a BA from UC Berkeley in Legal Studies and Education, calls herself a “sex educator, social justice activist, crisis counselor, YouTuber.” She seems to have devoted her life to teaching young people how to have the “best sex ever” through her videos and her visits to college campuses like UC Riverside.

A Naked Notion is set to debut this week and will showcase “question and answer”-type videos – i.e., a teenager asks a question, and PPNNE and Green answer the question through a video. The project replaces the ever-controversial Consensual Text blog, which included a post entitled “Debunking Abortion Myths in Honor of Roe.” In addition to promoting dangerous, meaningless sexual behaviors among the impressionable, vulnerable youths of our society, it is safe to say that A Naked Notion will continue PPNNE’s legacy of promoting on-demand abortion.

After all, Green says that “the ‘pro-life’ movement has evolved into a scarily terrorist-y force,” and she feels that violence against abortion workers and clinics are condoned. She calls pro-lifers lazy and goes on to write:

I constantly find myself asking: why are the lives of the unborn deemed more important than the real, living people who are pregnant? Are women so devalued to these pro-lifers that they sincerely don’t understand how problematic it is to put the unborn before the living? Regardless of how you feel about what constitutes “life”, the fact does remain that the LIVING BODIES supporting a fetus are just that: living. There is no dispute; they do not rely on another’s body to live, they have a fully developed conscious, and because there is no ambiguity about how alive people who can become pregnant are, they should be afforded all the rights of the living.

The problems with her theories, however, are quite obvious. Violence is never condoned by the pro-life movement. Green can scream as loud and in as bubbly a way as she wants to that pro-lifers are really pro-death, but that doesn’t make it true. In addition, the unborn are living people. True, they are dependent on their mothers and don’t have a “fully developed conscious,” but the same is said of newborns and infants. We can’t kill someone just because her existence gets in the way of what we want.

Green and PPNNE’s partnership is a frightening one, as Green has the personality and wardrobe that will attract many naïve young people, but the two will be ultimately unsuccessful. The duo will be working to sway members of the pro-life nation over to the dark side, professing that we can never return to the days of dangerous illegal abortions. What they fail to realize is that we won’t. While they claim that abortion will always exist and that making it illegal will only lead to the deaths of women, what’s really true is that when we finally arrive on that day when Roe v. Wade is overturned, it will be because science has finally proven to pro-choicers that fetuses are human and that abortion is murder. There will be few doctors willing to perform abortions and a minuscule amount of women who believe that abortion is justified. Truth and knowledge will finally replace fear and ignorance. And there’s nothing Planned Parenthood and their shiny new talisman can do about it.