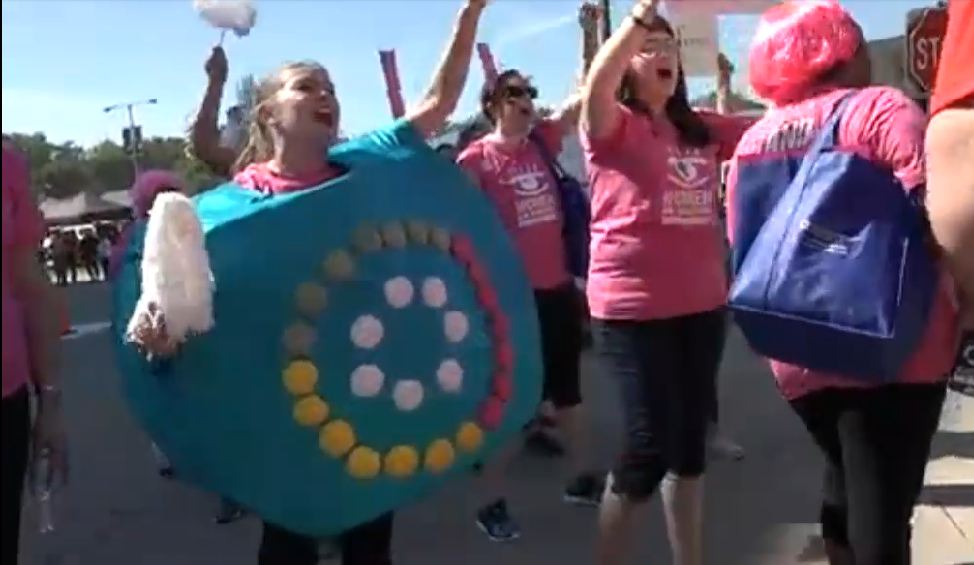 GOP presidential candidate Carly Fiorina was campaigning at a tailgating event for the Iowa Hawkeyes on Saturday when Planned Parenthood supporters decided to disrupt her event.  While the protesters’ actions were certainly less than classy, they were not all that surprising.

ABC News reported that Planned Parenthood supporters showed up in their trademark pink garb. During the event they shouted out their tagline, “Women are watching and we vote.” Some Fiorina supporters yelled back, “So do we.”

At one point, the Planned Parenthood supporters even threw condoms at the crowd. A patient from Planned Parenthood, Cindy Shireman, also made her way over to Fiorina to confront her, claiming Fiorina doesn’t support women’s health.

Fiorina grasped her hand and offered right back that she, of course, does support it.

Fiorina is pro-life. Recently though, she came under fire from Planned Parenthood and the mainstream media after calling out the abortion giant for harvesting the brain of a baby born alive from an abortion. Fiorina was describing a video released by the Center for Medical Progress.

A Super PAC which supports Fiorina also released a campaign ad regarding the incident.

ABC reporter Jordyn Phelps tweeted images of the protesters, who looked fired up and ready to disrupt, as well as of the condoms thrown.

Planned Parenthood bills itself as a non-profit, trusted health care organization. They also receive taxpayer dollars. And while counter-protesters show up at events all the time, there are proper ways to act. Perhaps Planned Parenthood’s supporters missed that memo.

Planned Parenthood seems obsessed with sex and birth control of all kinds. But what is worse is they also butcher babies, as Fiorina reminds us, and then profit from such a barbaric act. Perhaps disrupting a campaign with their angry and wild antics shouldn’t be all that unexpected.