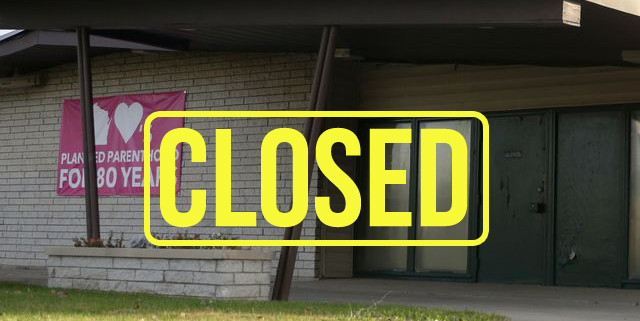 Planned Parenthood is down to only two abortion facilities in the entire state of Wisconsin, as it has announced the closing of its Fox Valley location in Appleton.

A separate facility offering birth control and basic cancer screenings will remain open in the city, but the shuttered location was responsible for approximately 600 abortions in 2014. The loss will hopefully help continue the 10% decline Wisconsin abortions saw that year, following Governor Scott Walker’s 2013 signing of a mandatory ultrasound law.

However, Planned Parenthood of Wisconsin is trying to spin the decision. The Milwaukee Journal Sentinel reports:

[T]he organization announced Monday it was closing the Appleton clinic because of security concerns. Planned Parenthood conducted a review of its facilities after a shooting last year at one of its clinics in Colorado Springs and found the Appleton clinic did not have enough protections […]

Making the necessary security upgrades would have cost nearly $300,000 — about twice the value of the clinic, [PPWI chief operating officer Chris] Williams said in a conference call with reporters. The lot the clinic sits on also is not large enough to accommodate the needed security changes, said Iris Riis, a Planned Parenthood spokeswoman.

The location temporarily shut down in 2015 because Planned Parenthood could not find an abortionist for the facility, and Wisconsin Right to Life Executive Director Heather Weininger says the Appleton closure helps the abortion giant minimize profit loss.

“As more and more women choose life every year in the state of Wisconsin, Planned Parenthood’s profit margin suffers,” continued Weininger. “Ultimately, that is why Planned Parenthood of Appleton’s abortion facility is closing, and for that reason, we celebrate.”

The Journal Sentinel notes that “security reviews” were conducted at Planned Parenthood locations throughout the entire country, but PPWI had to admit “they did not know of any others that were closing” as a result of their findings. When the five previous Wisconsin locations Planned Parenthood closed in the state in recent years, they admitted money was the reason.

Indeed, the National Abortion Federation’s own numbers reveal that despite the “epidemic of anti-abortion violence” narrative, violence and threats against abortion facilities and providers have actually been occurring less in the last five years than they did prior to 2009, when notorious late-term abortionist George Tiller was killed.

Actual murders of abortionists are even rarer, with eight recorded since 1977 — still eight too many, of course (something the pro-life movement can’t make clearer, as we unanimously denounce violence committed in our name).

The only reason anyone believes this is a rising trend of the sort that would necessitate such destructively-expensive renovations is because the abortion lobby and their media enablers constantly claim that it “incites violence” to do nothing more than accurately describe Planned Parenthood’s activities.