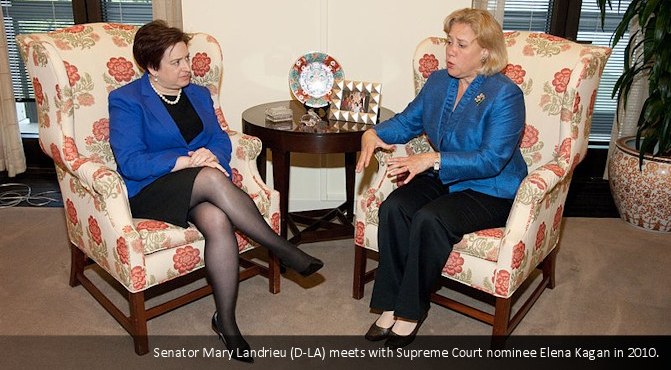 Guillroy, the first African-American to sit in the State Senate as a Republican in over a century, appeared in an ad that accused Landrieu of ignoring black voters. Guillroy alleged that Sen. Landrieu’s lack of concern for education and economic development has disproportionately harmed Louisiana’s African-American community, particularly its children. I can think of something else that Mary Landrieu has done to harm black children: throughout her career, she’s supported Planned Parenthood, America’s largest abortion provider.

For years, abortion and racism have gone hand-in-hand. Disgraced President Richard Nixon favored aborting mixed race children, stating that an abortion was needed “when you have a black and a white.” Nixon also pointed to abortion as a means “to control the negro bastards.” That may have been why federal funding of Planned Parenthood began under his administration, a move that the group’s CEO praised Nixon for in 2012.

Since 1973, over 14 million African-American children have been aborted. Helping that process along was the the decision by Planned Parenthood to locate many of it’s facilities close to minority neighborhoods. This is demonstrated through a map available at ProtectingBlackLife.org showing data from the 2010 US census as well as the location of Planned Parenthood abortion clinics. And as the following cases demonstrate, it’s not only unborn children who are at risk in some of these places.

Planned Parenthood of Delaware’s Wilmington Center is located in a largely black and Latino neighborhood. It gained notoriety in 2013 when two nurses, Jayne Mitchell-Werbrich and Joyce Vasikonis, went public about the “meat-market” conditions that they witnessed while working there. This included bloody, unwashed tables, unsterilized instruments, and an “assembly line” mentality when it came to abortion. The two women later testified at a state legislative hearing, with Mitchell-Werbrich drawing parallels between Planned Parenthood and Kermit Gosnell, noting that, “Both operated extremely hazardous abortion clinics and their respective states refused to close them despite repeated warnings.”

The Virginia League for Planned Parenthood clinic in Richmond is located within walking distance of several predominantly black areas. In 2011, volunteers from Live Action visited the facility while posing as child sex traffickers. Using hidden cameras, they recorded a staff member who was willing to help arrange abortions for underage foreign prostitutes as young as 14. This is consistent with what Live Action Personnel observed at a Planned Parenthood facility in Perth Amboy, NJ. There, clinic manager Amy Woodruff offered to set up involuntary abortions on minors who “can’t speak English” and “won’t know what’s going on.”

The Planned Parenthood Memphis Health Center is less than a mile from a number of African-American neighborhoods. Live Action founder Lila Rose went there claiming to be a 14-year-old who had been impregnated by her 31-year-old boyfriend. Rather than report this information to law enforcement, Planned Parenthood’s staffer explained how Rose could illegally obtain a secret abortion to protect the baby’s father. The employee’s nonchalant reaction suggests that this sort of thing is routine, which makes you wonder how many vulnerable young girls have been abandoned to exploitative relationships.

None of this depravity should be surprising when you consider who Planned Parenthood is willing to take money from. In 2008, Planned Parenthood officials in multiple states were willing to accept donations from callers who specifically said that they wanted to see black children aborted because they were frustrated with affirmative action. That fits in line with the attitude of Planned Parenthood’s founder, Margaret Sanger, who attended a KKK rally in 1926.

While pro-lifers have long called for a thorough investigation into Planned Parenthood, Congressional Democrats have condemned this effort, referring to it as a “witch hunt.” Sen. Landrieu has been of no help, having earned a 100% rating from NARAL for supporting Planned Parenthood and the half billion in taxpayer funding that it receives.

Pro-life Americans should let Sen. Landrieu know about their disappointment on this issue. Planned Parenthood’s racist agenda belongs in the past, and we need elected officials who are willing to put it there.