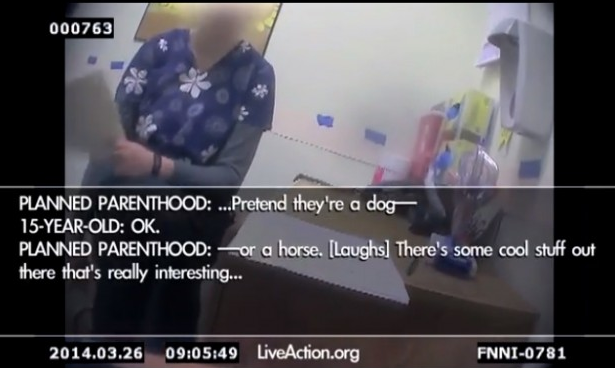 A new investigative video produced by Live Action shows a Planned Parenthood staffer coaching a 15-year-old girl on how to view pornography, visit sex shops, and experiment with torture and bondage sex without parental knowledge. Episode Two of Live Action’s video series, SEXED, details how a counselor in Colorado’s Planned Parenthood of the Rocky Mountains encouraged a teenager to subject herself to or inflict sexual pain on her boyfriend. The investigation is the latest in a series of exposes under covering the abortion giant’s dangerous sex education for kids.

Teen: “If I were to look that up on my computer, um, could my parents see that?”

Planned Parenthood: “Possibly, do they get on your computer a lot?”

Teen: “Well, I use the family computer.”

Planned Parenthood: “So they might be able to go in your history and look, so you might want to do it elsewhere. It depends though if they are on your computer a lot.”

Teen: “It’s a family computer so I probably wouldn’t want to look anything up, I guess.”

Planned Parenthood: “If your phone has Internet, you can use your phone too.”

During the consultation, the counselor only counseled the teenager to using only a “safe word” during bondage and torture sex to communicate to the partner if pain becomes dangerous or unbearable.

“Planned Parenthood of the Rocky Mountains is already bragging about receiving ObamaCare grants specifically for sex education,”  said Lila Rose, President of Live Action. “Here’s an abortion corporation, which gets 45 percent of its budget from the taxpayers, telling 15- and 16-year-olds not only to have sex, but also to choke each other in the process. Police should be busting down its door.”