If you take away life, there’s no room for liberty or pursuit of happiness. 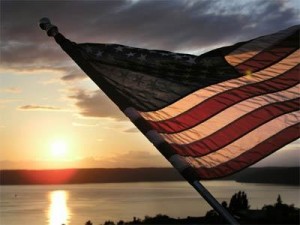 How are the measures that Planned Parenthood supports patriotic? A patriot, according to the New Oxford American Dictionary, is “a person who vigorously supports their country and is prepared to defend it against enemies or detractors.” Are unwanted children now such a threat in Planned Parenthood’s mind that they are “enemies and detractors” to America? Are children so terrifying that a true patriot must end unborn lives for the sake of the nation?

Or perhaps Planned Parenthood doesn’t mean American patriotism. Perhaps we should ask, patriotic to whom? Are we a nation like China, where reducing the number of children is deemed a patriotic duty? Are we an ancient civilization that sacrifices children on an altar to spare its country from angry deities? Planned Parenthood’s argument may work in these areas, but to argue that supporting abortion is patriotic in America is simply absurd.

As I noted at the time of Hoffman’s statement, abortion undermines everything that Americans traditionally endorse. American ideals include life, liberty and the pursuit of happiness, while abortion takes away life, and therefore liberty and the pursuit of happiness. Americans pledge to a nation with “liberty and justice for all,” while abortion denies liberty and justice for many. America is defined by freedom, but an abortion takes away all freedom from a very tiny American – an American who will never vote, never watch fireworks on the 4th of July, and never taste apple pie.

This illogical comparison isn’t isolated. Planned Parenthood is notorious for defending slaughter with semantics and death with distracting dialogue. It is a classic example from Planned Parenthood Advertising 101. Take words people like, apply them to something people don’t like, and voilà – the brand will sell: Rob a child of a lifetime of choices and call it “choice.” Leave women like Tonya Reaves to die at a Planned Parenthood clinic while clamoring for “women’s rights.” Most of all, assume women will blindly miss this deception, while claiming to “trust women” to make life-and-death decisions.

Despite Planned Parenthood’s attempts to say otherwise, abortion is neither patriotic nor American. If we truly wish to be patriotic – defending our fellow citizens from harm – let’s defend the lives of all Americans, born and unborn.

*Perhaps I am too harsh, as Planned Parenthood has occasionally advocated for women’s health measures broader than abortion. Among Planned Parenthood’s current favorites is the HHS Mandate, which requires religious organizations to fund abortion and contraceptives for employees, despite religious objections. Surely Planned Parenthood believes that the early Americans who came to this nation seeking religious freedom would also deem this measure patriotic and American.