“Abortion” might seem an odd search term for Pinterest.  But since this explosive, relatively new social media site is increasingly becoming an addictive place to share opinions, beliefs, and ideas – in the form of images – we ought to check in and see just how abortion is doing.

At various times this year, Pinterest has been ranked the 4th and 5th most popular social network in the U.S.  Worldwide, the site’s been ranked 14th on the popularity list.

Of the first 20 images to show up (as of 7:04pm EST today) on Pinterest when “abortion” is searched, a full 19 of them are pro-life. What’s more, these images represent a creative cross-section of truth – not simply a collection of bland talking points.

Take a look at the images below (chosen out of the top 20 Pinterest results), and add your own commentary on how you think these images could be effective. 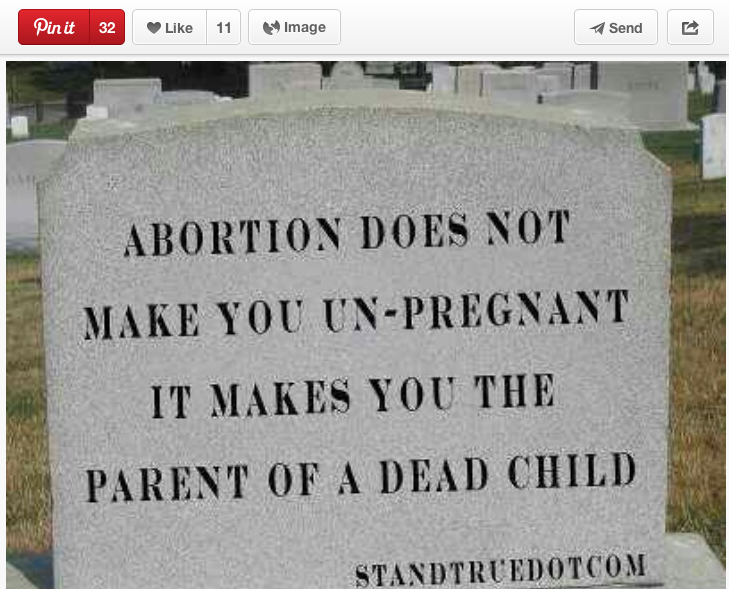 This image was the current top “abortion” result on Pinterest. This image illustrates the stark reality that abortion brings death and does not solve what many people view as a “problem.” Instead, abortion creates its own host of true problems – chief among them the unnecessary death of an innocent child. It’s time we learned that death is never a solution… 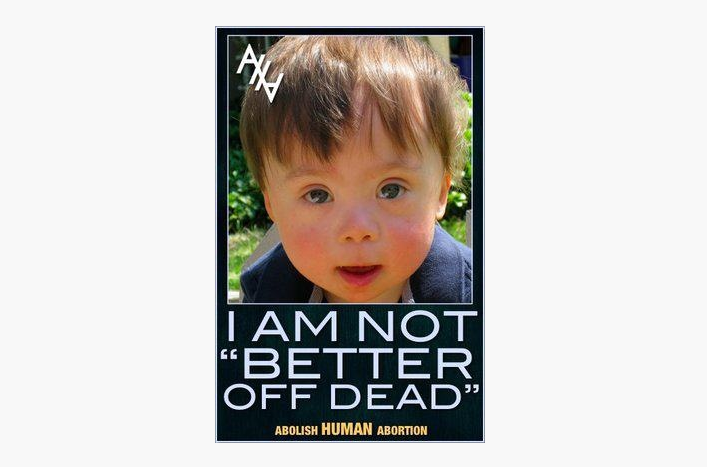 Nancy Flanders has also written an article introducing our readers to Noah’s Dad.  Noah’s Dad writes beautifully about the joy of life with a son diagnosed with Down syndrome.  His writing has saved other babies just like Noah.  The bottom line is this: parents need to be exposed to the real facts, the real truth, and the real, beautiful images like this one on Pinterest. 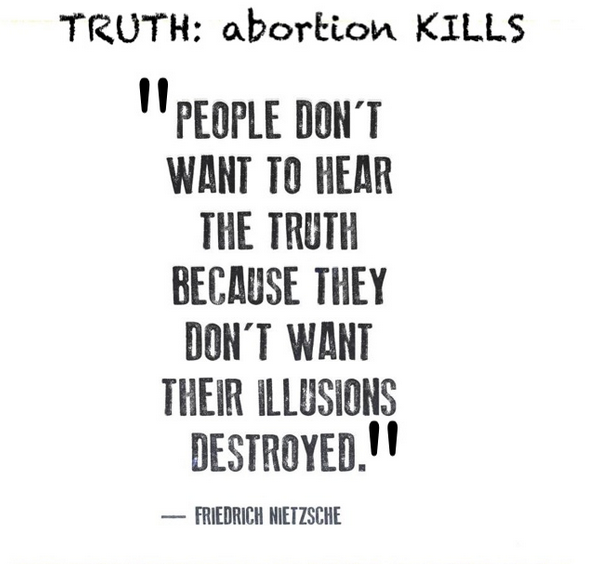 Even Nietzshe – arguably a major influence on Hitler’s thinking – realized that people don’t always want to know the truth. Of course, this opens people up to the deception and lies of the abortion industry. We must take it upon ourselves to broadcast the truth until everyone hears it – whether they want to or not. As this poster accurately proclaims, “abortion kills.” 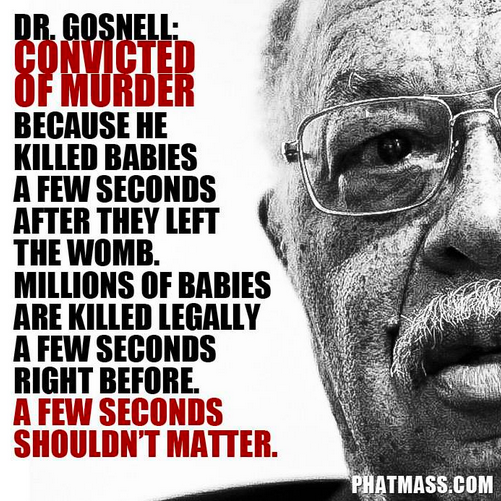 Few images could be more accurate or more straightforward than this one. The recent Kermit Gosnell trial (where an abortionist was tried and convicted of murdering babies after failed abortion attempts) highlighted a major inconsistency in our nation. How can a few inches or a few seconds be the deciding factor in whether or not an innocent human being can be killed?

The image below presents the same question in an even clearer way. (It is in the top 50 results on Pinterest.) 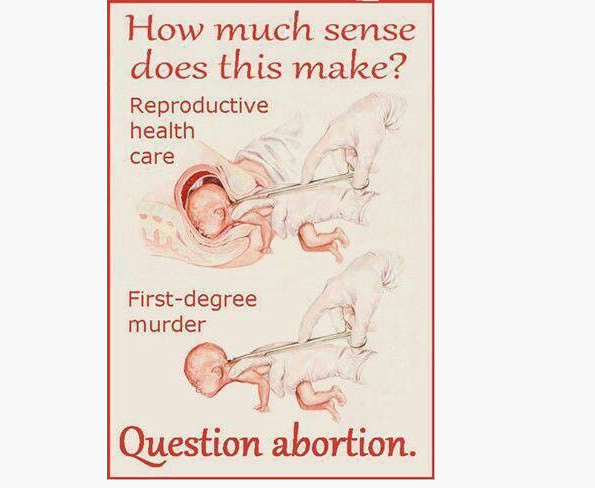 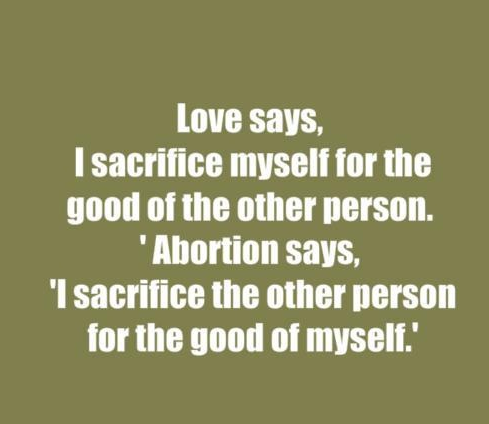 This image gives a unique twist on illustrating the selfishness of many abortion decisions. The majority of abortions are done for reasons that boil down to convenience or choosing an “easier life” for oneself. Are such things truly worth the life of an innocent child? Is any reason really good enough to execute a small child with no voice or ability to help herself? Have we become so callous to the daily sacrifice of children that we fail to speak up about abortion?

This beautiful images illustrates the humanity and perfection of an unborn child. This child is at a similar age to thousands of children who are aborted throughout our nation. And his beautiful feet speak volumes for the right of children just like him to live. 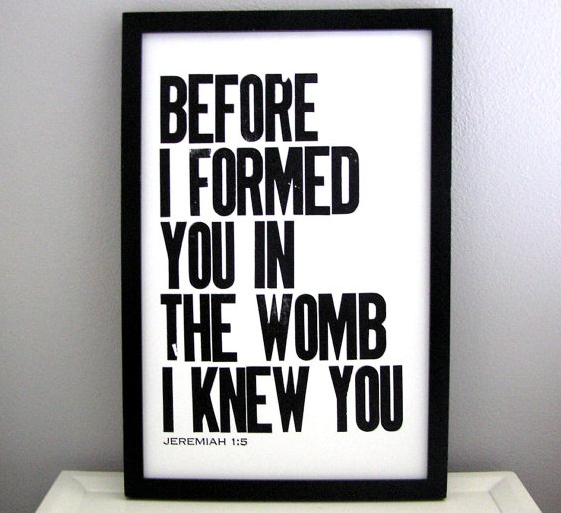 This image (the 2nd to come up on my Pinterest abortion search) is perfect for a social media site in many ways. Social media – and Pinterest in particular – is designed to be personal. There are countless ways to personalize Pinterest, and many use the site as a way to make a statement about who they are. This verse from the Bible can remind users that, even before their life was recognized here on earth, they were already known as the unique person they are today. What a beautiful message about the timelessness and value of every single human life.

So, how can you influence what people see when they search Pinterest for abortion? First, follow Live Action on Pinterest.  You’ll find plenty of images you can repin. Second, read this creative article by Katie McCann. And finally, find and create you own pro-life images about abortion. Spread them as you use social media, and expose the world to the real truth about abortion.