Like many working in the pro-life movement, I just can’t seem to get “life” off the brain. I can’t help but see a pro-life angle on just about anything that comes before my eyes or passes through my ears.

Thanks to the social media darling, Pinterest, my ability to thrust a pro-life angle out into the culture to play with and think about has expanded significantly.

Two images that I have pinned in the last few months have gone viral. What’s interesting about these pins is that neither Ohio Right to Life nor anyone in the pro-life movement (as far as I can tell) created them. All I did was caption each with a message that included “#prolife.”

Both are seemingly innocuous, right? The one is a tender thought on sisterhood. The other is a Harry Potter quote. Both would surely pull in plenty of people, pro-life and pro-choice alike.

Sisterhood got repined more than 1200 times:

And Harry Potter got repined more than 1500 times: 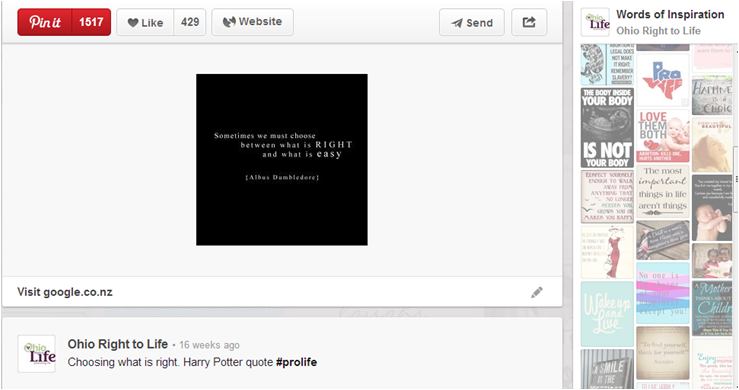 Now people can certainly be repinning these images without regard for the captions I create. And many in fact didn’t repin these because of the captions—as they told us in their comments. (Never mind that users are free to repin an image and edit the caption to their liking.)

On each image, users expressed their frustration that a “poignant” or “wonderful” post was given a pro-life angle.

Despite liking the post for what it said, they refused to indulge what I interpreted to be a positive, pro-life message.

Notice that I said nothing about banning abortion, and really, nothing political.

I made reference to “choice” (the most critical factor in ending abortion being a mother’s choice to reject the abortion industry) and the value of family, a factor that will hopefully inspire more women to choose life for their children.

Both pins are inspiring. Both speak to the power of human choice and love, things that should prompt us to choose good over evil.

Some people didn’t take these posts well. But thousands of Pinterest users liked them enough to repin them because, at a very basic level, the Pinterest community is one that is looking to inspire and to be inspired. I think the same is true of the pro-life community.

If one positive thought speaks to the part of everyone’s soul that longs to believe in the power of human choice and human love, then I can’t help but believe that Pinterest is a way of advancing pro-life culture, even if it is a small way.

Note: This article first appeared at the Ohio Right to Life Blog and is reprinted with permission.