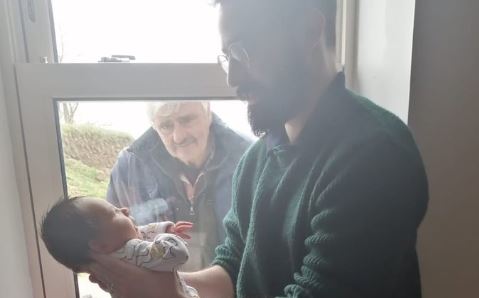 A moving photo from Ireland is showing just how much the coronavirus pandemic is affecting people around the world as social distancing is practiced in order to slow the spread of COVID-19.

Emma Ó Gallachóir tweeted a photo of her husband, Mícheál Ó Gallachóir, holding their newborn son. In the window outside was Mícheál’s father, who was seeing his grandson for the first time. What should have been a joyous occasion was obviously bittersweet; Michael Gallagher, the grandfather outside, looks more sad than celebratory.

Three generations of social distancing as my dad meets his grandson for the first time 😭😭😭 pic.twitter.com/uyHHgBBXxb

The baby boy, Faolán, was born March 14, just after officials in Ireland began encouraging people to keep their distance from others. “By the time we were leaving everything was closing,” Mícheál Ó Gallachóir told the Meath Chronicle. “We were told at the hospital to boil wash everything we had been wearing in the hospital and to isolate. We cannot have people holding him and the only other person allowed in the house is the public health nurse. I am on paternity leave at the moment, but when it is over I can work from home.”

None of Faolán’s grandparents have been able to hold him. Mícheál Ó Gallachóir likewise told the Irish Times of the effect it’s having on his parents, explaining, “I know my mam has cried a few times about not being able to hold him. It’s their first grandchild.”

“It is hard not being able to go into him and hold him, but they are all healthy and doing well and that is the most important thing,” Gallagher, a Sinn Fein member of Meath County Council, said in another interview with the Meath Chronicle. “This whole situation with the virus is so dangerous, that it is a small price to pay. It is disappointing that we cannot visit him, but it won’t last forever and we are looking forward to when we do get to see him.”

Millions of people around the world are fighting to protect and save as many lives as they can during the coronavirus outbreak. But meanwhile, abortion businesses have remained open, while others have argued that elderly lives are more expendable. As the Ó Gallachóir family shows, however, each and every life is sacred and worth protecting: from the tiniest babies to the oldest adults.