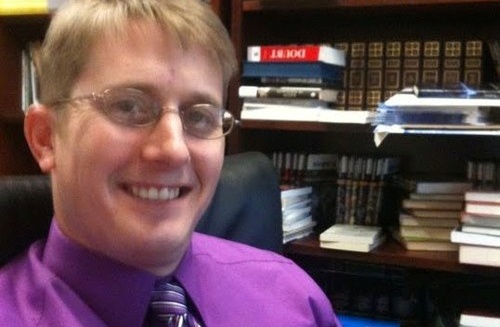 It’s understandable that pro-abortion fanatics would be big fans of Planned Parenthood. Why shouldn’t they be? Planned Parenthood is the largest provider of abortions in the country, and has practically made abortion their sole business thanks to the “leadership” of Cecile Richards.

Prenatal services, cancer screenings, actual health care for women? All have radically declined, thanks to Richards’ pro-abortion extremism. So sure –someone who identifies as radically pro-abortion is probably all about Planned Parenthood. But a Christian pastor? It may sound crazy, but Presbyterian pastor Andrew Kukla just penned an op-ed about why he “hearts” Planned Parenthood.

I love these people who do not care what others will label them or say about them or even say to them. They care too much about people and too much about life to let hate and ignorance hold them back.

As a Christian, I am called to grace, forgiveness, mercy… and building up of those who life has torn down. And from all I learned today, some of the greatest practitioners of that are the people working at Planned Parenthood.

So I say it proudly: I love Planned Parenthood.

I love the people that are Planned Parenthood.

I love their ministry.

I love that they live resurrection in a way I only talk about it.

“Care. No matter what.” Those are words to live by! The graphic that Andrew Kukla fell in love with

Kukla writes that he had a revelation after walking out of a Planned Parenthood meeting at one of their abortion mills, where he realized that, inexplicably, what the staffers there were doing was “resurrection work.” To him, they were “promoting life,” “filling death with life,” and rolling back stones that “trapped people in death”… you know, just like Jesus did. Because if there’s one thing Jesus loved, it was killing innocent children.

It’s mind-boggling, if nothing else, to claim that the act of killing preborn children somehow promotes life and keeps people from being trapped in death. After all, every single child that Planned Parenthood cruelly murders is just that: trapped in death. They cannot escape. They cannot fight back. They are trapped, and they are killed. There is nothing about abortion that promotes life. A baby is aborted every 90 seconds at a Planned Parenthood. There is nothing life-affirming about that.

He says that as a Christian he is called to mercy, but where is his mercy for the children whose lives will be snuffed out by the abortionists at Planned Parenthood? He says he loves Planned Parenthood because they build up people who life has torn down – but isn’t the exact opposite true?

Abortion doesn’t build anyone up. It’s an inherently violent, gruesome procedure that takes a life, when a woman is at her lowest and most vulnerable moment. Rather than building up women who are facing crisis pregnancies by giving them aid and resources, Planned Parenthood gives these women death.

And perhaps Kukla is unaware of the kind of “care” Planned Parenthood provides. Their slogan may be “Care, No Matter What,” but what they actually mean is “Abortion, No Matter What.” This is why they have been caught repeatedly breaking the law in order to perform more abortions. Minor girls who are victims of sexual abuse are given abortions and then handed right back to their abusers.

They have been found willing to aid and abet sexual trafficking of children. They are willing to cover up the rape and abuse of children. They pump women full of lies and misinformation to ensure they don’t lose the chance to perform an abortion. And they force every affiliate to provide abortions, forcing clinics who want to focus on something other than abortion to cut ties with Planned Parenthood.

Planned Parenthood is an evil organization that traffics in death. They exploit women in need, and instead of giving them hope, they give them death. What could possible be Christian about that?