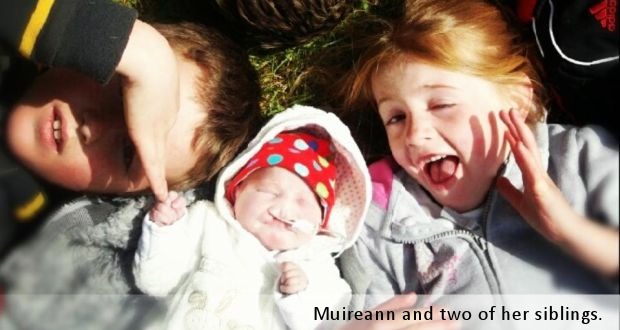 Mandy and Tom Dunne were excited to be experiencing the 20 week ultrasound of their fifth child. But their excitement was abruptly ended by the doctor’s discovery that something wasn’t right.

Their baby girl had fluid on her brain, and further testing led to a diagnosis of Trisomy 13, considered to be incompatible with life. Doctors weren’t sure the baby would survive the pregnancy, but if she did, they didn’t think she would survive labor and delivery. Mandy and Tom were heartbroken.  They recently shared their story with the Irish Times.

It was December of 2011 in Ireland.  At that time abortion was 100% illegal in that country. Currently, a new abortion law exists that allows abortion in Ireland in limited circumstance. Mandy and Tom knew that they could travel out of Ireland for an abortion, but they didn’t consider it for even a moment. As Mandy told the Irish Times:

It would never have been an option for me. We were going to be grateful for whatever time we had with her. When her time was up, it was to be on her terms and not ours.

The couple started to plan for a baby that was not likely to live, asking a priest to be present for a christening immediately after her birth, and inviting a photographer to be there to take photographs of those few moments of their daughter’s life. However they waited to tell their four other children about their sibling’s diagnosis until Mandy was about 30 weeks pregnant. The children followed their parents’ lead in remaining hopeful for their baby sister. 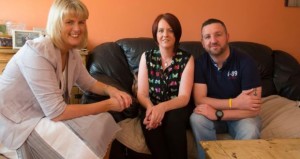 At 39 weeks, Mandy was induced, and according to the Irish Times, she chose not to have her daughter’s heartbeat tracked during labor, saying:

Hope was keeping us going. I didn’t want to hear if she had died during labour.

When their daughter, named Muireann Shionagh, was born, she was alive. But doctors told Mandy and Tom that she would likely only live for a few moments.

“I sat cuddling my daughter, numb to what they were telling us, trying to examine every inch of her little face before she passed away,” Mandy told the Irish Times.

But then a miracle happened. Muireann began to cry and her skin went from grey to pink. Her siblings were able to come and see her and as the day went on, it seemed more and more as if they would be able to bring Muireann home.

Mandy and Tom were nervous. They hadn’t planned on bringing Muireann home and weren’t prepared. Thankfully, Joanne Doyle, a liaison nurse with the Jack and Jill Children’s Foundation put their minds at ease. The charity had recently began offering end-of-life services for children with any condition from birth through age 4.

The family of seven returned home, and after two weeks, Tom went back to work and life went on as normal.

“We looked on it as if we were bringing her home to live, not to die,” Mandy explained to the Irish Times.

Days turned to weeks, but then one night, on a family vacation, Muireann spiked a fever. Tom and Mandy rushed her home. Joanne met them there to monitor Muireann and keep her comfortable, allowing Muireann to stay away from the hospital so she could die peacefully at home with her parents and siblings nearby.

Muireann passed away at her home six weeks to the day after her birth. She is buried beside a church in a spot her brother Conor wrote about for a school assignment called A place I consider beautiful. He wrote:

It is the place where my sister sleeps in a covered wooden bed with her favourite toys and a picture of my family, her blanket, earth and her precious flowers [… she could] fill my mother with happiness with just a smile […] There is no foot too small that it cannot leave an imprint on this world.

Muireann, a child no one expected to live, spent six happy weeks with her family. Six weeks of cuddles and smiles that she and her family never would have shared if her parents had chosen abortion.