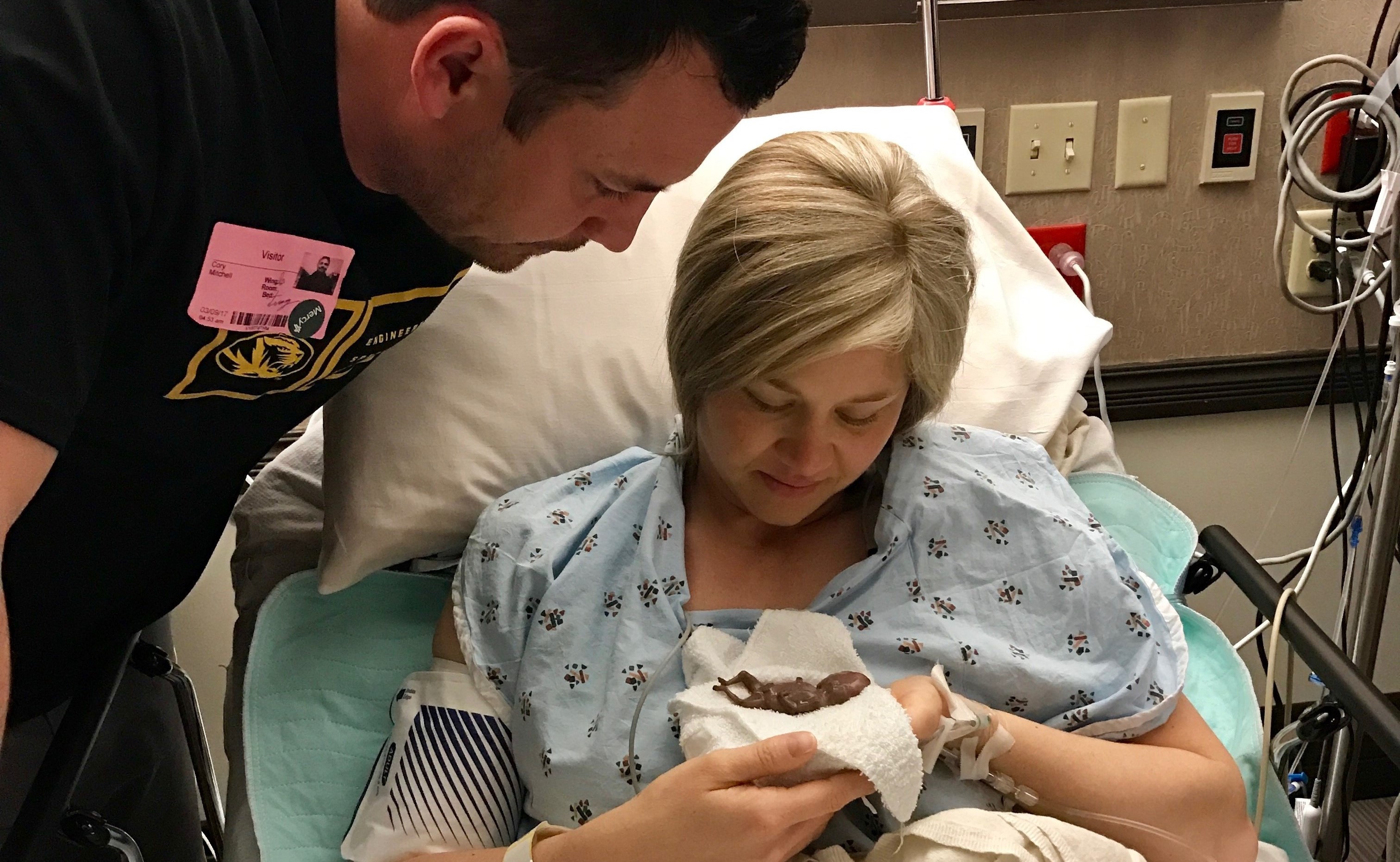 Lauren Mitchell and her husband Corey had already experienced two miscarriages in between the births of their two sons when they were surprised to find out they were expecting again. Though they hadn’t been planning the pregnancy, they accepted the news as part of God’s plan and were excited to welcome a new life into their family.

“He said, ‘Let me go get my ultrasound machine,'” explained Mitchell. “He wheels it into the room, and he was trying to find the heartbeat. The heartbeat was just absent. My doctor at first thought the baby was moving so he wasn’t feeling very good about it and was thinking maybe something was wrong with the ultrasound machine. He sent me to the hospital right next to his building to have an ultrasound done.”

Mitchell went to the hospital and texted family and friends for prayers. When she arrived, the ultrasound technician quietly performed the sonogram. When she was done, Mitchell knew that something was indeed wrong.

“I asked her, ‘There’s not a heartbeat, is there?’ She said, ‘No, there isn’t one, but I need to send the images over to fetal ultrasound so he can read them, and he can determine what happened,'” said Mitchell.

The doctor at the hospital was unable to find a reason for the baby’s death, but the doctor diagnosed intrauterine fetal demise. The next morning, Mitchell’s doctor called to share that the baby had measured at 14 weeks, meaning little Gabriel had stopped growing two weeks prior to the ultrasound. Mitchell and her husband had two choices: have a D&C procedure done to remove the baby from the uterus or induce labor. They chose to induce labor, and it was scheduled for just two days later.

During the two-day wait, the couple continued to ask for prayers from family and friends and hoped for a miracle. Mitchell requested one final ultrasound just to be sure that there was indeed no heartbeat before going ahead with the induction. Unfortunately, no heartbeat was detected during that ultrasound, either. 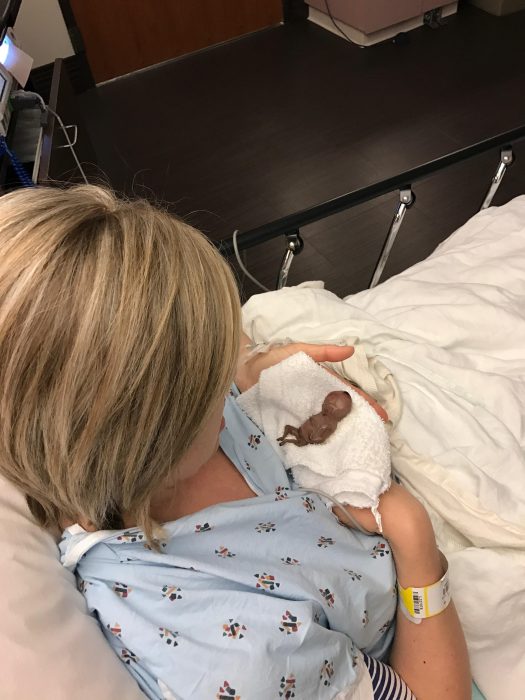 Baby Gabriel with his mother. Photo courtesy of the Mitchell family.

“It was very difficult to know that there was no life, but to see this baby that was 14 weeks gestational age was completely formed… We didn’t know that it was a baby boy until he was born because we wouldn’t know until the 20-week ultrasound,” said Mitchell. “He was completely formed. Fingers and toes and eyes and ears and nose and mouth. My mom is in the medical field, and she was examining him. You could open his little mouth. You could see his ribs. Everything was perfect.”

Doctors were unable to determine the cause of Gabriel’s death, but his parents are finding strength from their faith in God and the belief that He has a plan for them. They are hoping that their sharing Gabriel’s photos will enable his life to help save the lives of others. 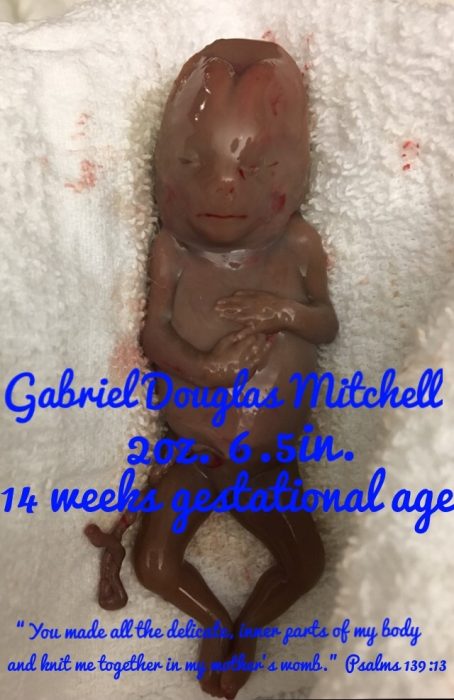 “The main reason that I wanted to share him on Facebook was so that anyone and everyone could see what a perfectly formed little human he was just at 14 weeks. He wasn’t just a ball of nothing or tissue. He was perfect and we could hold him in the palm of our hand,” said Mitchell. “My husband, prior to the induction, didn’t know what to expect and was nervous what he would look like. Once he was born, we were just in awe of him and what a miracle he was. It felt like we were holding Heaven in our hands; he was just so perfectly formed.”

Knowing that abortions are performed all the way through pregnancy in some states, Mitchell felt she couldn’t keep Gabriel to herself. She believes he was meant to be shared and that sharing his life is one of the purposes God has given her – to allow others to see what a miracle life is, even at the earliest stages of pregnancy.

The hospital released Gabriel to his parents in a tiny casket tied with a little ribbon. They were able to have a graveside service for him with a local funeral home. Gabriel is buried in a place called Babyland, surrounded by other children who lost their lives too young.

While Mitchell is hoping Gabriel can help save the lives of other children, she also wants to help the mothers who are thinking of abortion. 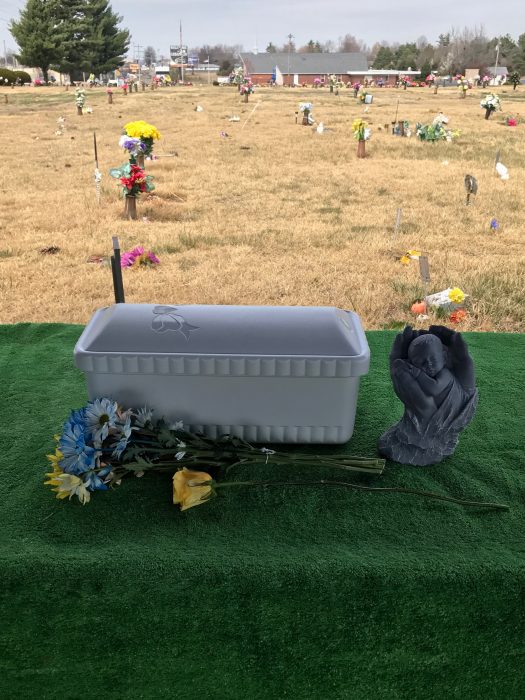 “The babies who are aborted go to Heaven,” she explained. “It’s the women that are left behind with the guilt and shame, and at the time they think it’s the only option that they had, but I have a friend who 26 years later is still mourning this decision [of abortion], and if she could change it she would. I’m speaking from the experience of, not a woman who has had an abortion, but of witnessing women who think at the time that abortion is all they can do, that this is the best thing for the baby. They live with this pain forever. The babies shouldn’t, of course, be murdered, but these women break my heart. … They mourn the loss of that baby forever. I, of course, want this to save the babies. Babies are a miracle. But I want to save these women from the hurt that they will experience because of a decision they are making. There is support out there. You just have to reach out and try to get that.”