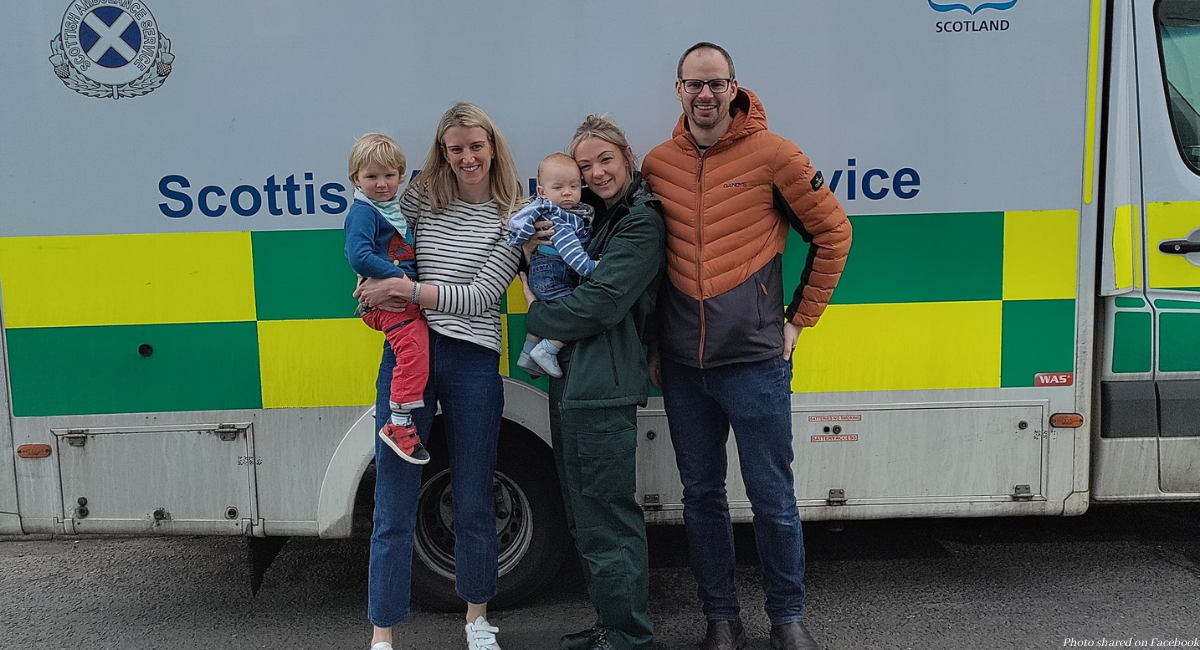 While on a family vacation at an Airbnb in Scotland with her husband and son in June 2021, Alex Clayton of England went into premature labor six weeks early. According to the BBC, she woke up to realize that her water had broken and her baby’s head was stuck. If it weren’t for the emergency dispatcher, her baby may not have survived. Recently, she was able to thank that dispatcher in person.

It was the middle of the night when Alex woke up feeling unwell and went to the bathroom. It was then that she realized her waters had broken and that her baby was in the breech position with his head stuck. Her husband Tony called 999 for help, and the Scottish Ambulance Service dispatcher Lorna Milward was able to talk him through the birth of his child in the Airbnb’s bathroom. However, the baby boy, named Fraser, was unresponsive, and Milward had to instruct the father on how to resuscitate him.

“It all happened so quickly, but I just remember how Lorna was so good at giving directions to us over the phone,” Alex told the BBC. “If it wasn’t for Lorna, I don’t think Fraser would have made it.”

Tony added, “When I realised what was happening I was terrified and felt utterly out of my depth. Lorna was the very opposite — cool, calm and collected, she was able to talk me through something which I would never have been able to do without her on the end of the phone. We will be forever grateful to her.”

READ: Premature baby born on flight from London to India brings passengers together

Paramedics arrived and took Alex and baby Fraser to Victoria Hospital, where Fraser spent a week before he and his family were able to go home. Milward received a commendation from the Scottish Ambulance Service for her efforts to help the family and save little Fraser after the premature delivery. Nine months later, the family met her to thank her in person at the Edinburg ambulance station, where big brother Max was able to check out an ambulance.

“I was always wondering about them,” said Milward, “so I was pleased to get the chance to be able to meet them in real life. Once you are finished with a call you go straight onto the next one, so it was amazing to find out what happened, and to meet Fraser.”

She added, “It was a traumatic, life-changing moment for both Alex and Tony, so I knew I had to keep them calm and deliver instructions on what to do, until the paramedics arrived. Alex and Tony worked well together which was vital in the safest delivery and care of Fraser, given the traumatic circumstances.”

The family hopes to stay in touch with Milward and keep her up to date with how Fraser is doing. They now consider her “part of our family story.”