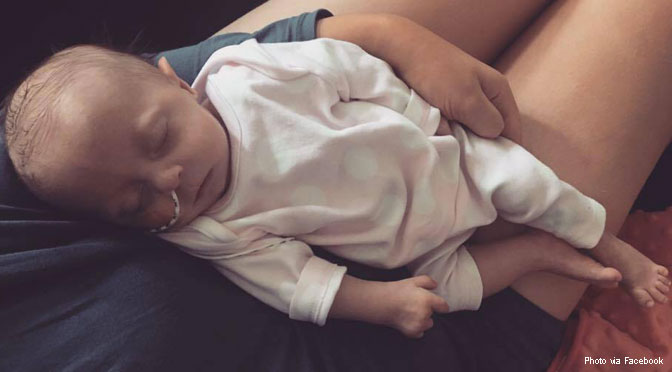 At their 20-week ultrasound for their baby girl, Elle Brant and her partner Denzil Amoah learned that their daughter has Edwards’ Syndrome, also known as Trisomy 18. Doctors advised the couple to abort their baby, and when the couple refused, doctors  said they would not provide the baby with any treatment to help her survive.

Trisomy 18 is caused by an extra chromosome which often causes miscarriage or stillbirth. Many with the condition die shortly after birth.  But the new parents did not want to give up on their daughter by aborting her, and they expected the doctors to care for their baby as they would any other patient.

“There was a massive chance we would lose her because her heart could stop at anytime. They were pushing me to terminate and when I decided against it, they said they weren’t going to offer her oxygen or treatment,” Brant told the Essex Chronicle. “They weren’t offering me monitoring during the pregnancy to check the baby’s heartbeat because she had Edwards’ Syndrome. They were discriminating against her before they even gave her a chance.”

With help from another couple who went through a similar situation, the parents fought back against the doctors. For five months they attended weekly meetings and exchanged emails with hospital staff.  Their persistence paid off when doctors agreed to treat their daughter.

“They were being very arrogant with us,” said Brant. “They were saying, ‘She won’t survive, we won’t treat her.’ But to see her on the growth scans and feel her kick and hiccup was so overwhelming. Maybe I was a little bit naive, thinking they had got it all wrong, but I wanted her to be treated like any baby. I didn’t want her to be discriminated against because she had Edwards’ Syndrome.”

Baby Amelia was born four days late and taken straight to intensive care. She stopped breathing, but was resuscitated by doctors, and after 16 days she was sent home.

“She would have died if we hadn’t fought for her,” said Brant. “They said they would put her in a cot and leave us to have some time with her. But now she is doing amazingly. She has got determination all over her face. Doctors told us she would never come off oxygen but she has. She is just on a feeding tube because she is so tiny.” Her parents fought hard for Amelia because they know that she is a human being and worthy of life. They knew she deserved a chance at life.

“It is such a shame that women are convinced to give up their children before they are even born,” said Denzil. “Every baby is an individual and even though it has a genetic problem, it isn’t the end of the world – our little baby is here and she is just fine. Imagine if we hadn’t gone through with it. We would be so gutted if we did get rid of her and we had a crystal ball to see her now. A life is a life. If she had been born without us knowing the circumstances beforehand they would have pulled out all the stops without questions.”