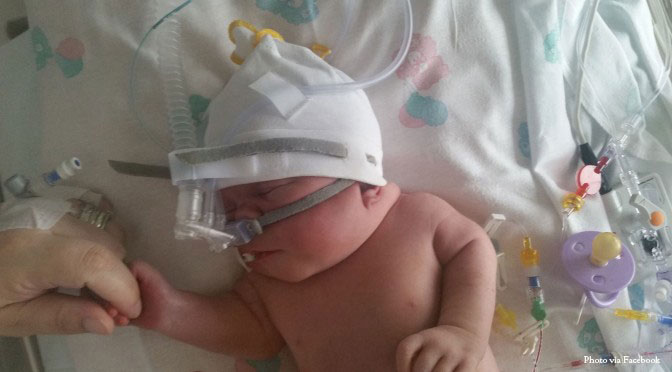 Chris and Natalie McCrone were excited to learn they would be adding twins to their family of four, but at 12 weeks gestation they learned one of the twins had died. They were devastated, and that loss would soon be followed by more heartbreaking news.

At 35 weeks it was discovered that their baby girl, named Cassidy, was not growing properly. According to the family blog, Cassidy’s limbs were not measuring at the right size for a baby her age. Her humerus bones were measuring 18 weeks and her femur bones at 27 weeks.

Doctors warned the McCrones that Cassidy might not survive birth or may need to be on a ventilator to breathe. However, the couple was determined to bring their little girl home, and before they headed to the hospital for a planned C-section, they made sure that their home was ready for the baby’s arrival. “We just tried to stay positive, we tried not to think that way,” Natalie McCrone told The Daily Record. “What kept me going was the fact she was still moving, still growing. […] It was heartbreaking, and we’d already had the heartbreak of losing one of the twins. We were crumbling inside but had to remain positive, and just hope and pray everything turned out alright.”

Cassidy was born on March 25, 2015 and did very well, surprising doctors by breathing on her own. At four weeks old she was finally diagnosed with rhizomelic chondrodysplasia punctata (RCDP), a rare genetic condition which most people die from within the first year of life.

“She’d been in four weeks before it came back that she had Rhizomelic CDP, which is the worst type,” Natalie McCrone told the Daily Record. “It’s the most fatal and life limiting. We looked into it some more but everything we found on Google was horrendous, saying 60 percent of people didn’t survive the first year. Then we found a website called Rhizo Kids, and that told us a wee bit more about it.”

There are 57 people in the world currently living with RCDP. Cassidy is the only person with the condition in Scotland, and her doctors had never had a patient with the condition before, which meant the McCrones were teaching the doctors what they were learning. “Sometimes they would even ask us to explain what our knowledge was, and that was quite hard for us because they were caring for our daughter,” she explained. “We expected them to have the answers.”

Since her birth, Cassidy has done well, surviving longer than expected and having surgery to correct cataracts. She has also been fitted with a hearing aid.

The McCrones got into contact with other families and learned of a clinical trial happening in the United States. They are currently raising money to cover the high cost of getting Cassidy into the trial and moving the family to the US for at least six months. It could be Cassidy’s only hope of surviving longer.

“It’s a chance we have got to take, we’ve got to try,” said Natalie McCrone. “You can’t go through life thinking ‘what if’. Right now she doesn’t even stand a chance so why wouldn’t we try?”

The trial is set to begin in July.