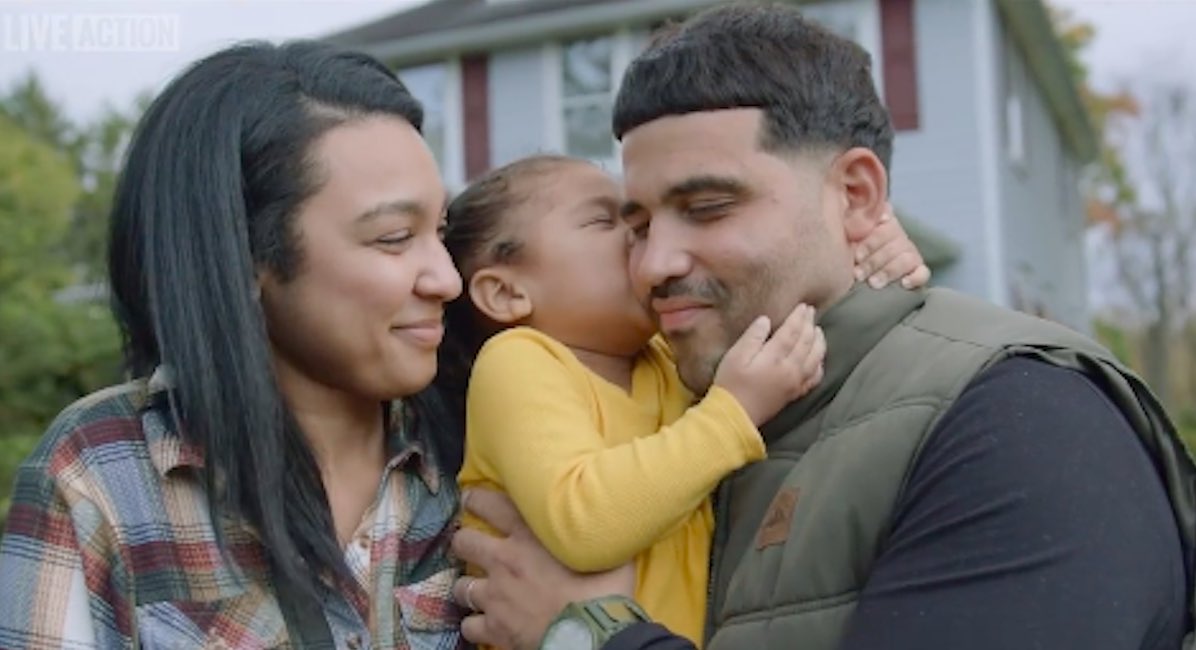 During the pregnancy with their first child, Lesha and Eric were repeatedly given bad news by the doctors. Lesha, who at the time considered herself “pro-choice,” considered abortion. But when Eric, who was pro-life, shared a Live Action Abortion Procedures video with her, she saw the truth of what happens during an abortion and knew she couldn’t go through with it.

“I was 22 when we got married. My husband was very pro-life, very against abortion, but for me on the other end, I was completely for it,” said Lesha in a Live Action video. “Sometimes we would find ourselves, like, butting heads about it. You know, he asked me, ‘Do you believe in abortion?’ And I said, ‘Absolutely. It’s a woman’s choice. It’s a woman’s right.'”

Lesha had been desensitized to abortion while in high school. She explained that a lot of the girls would talk about how they could just go down the street for abortion pills if they got pregnant. She accepted abortion and didn’t even question that it was anything other than a woman’s right.

The couple became pregnant within a year of getting married. Around week seven, Lesha began to feel very sick. She told the doctor about how nauseous and they told her it was just normal morning sickness. But then it became so bad that she went eight days without eating and was hospitalized.

“This is the point where I start questioning if I’m gonna be able to do another 30-plus weeks of this,” she explained. “I remember just waking him up at night and saying, ‘Eric I don’t think I can do this. This is… it’s just beating me up. I’m sick. I’m helpless. I think I want an abortion.'”

That’s when Eric showed her a video of the realities of what abortion does. The Live Action Abortion Procedures videos feature former abortionist Dr. Anthony Levatino explaining with images how each abortion procedure is carried out. Lesha watched the D&E dismemberment abortion video below.

“And I saw an instrument ripping the baby’s leg off limb by limb, arm and arm, up until the point it was just the head dangling inside the mother’s stomach and I immediately got sick again,” said Lesha. “I thought, ‘I could not go through with that.’ That video from Live Action saved my child’s life.”

The day she turned 14 weeks pregnant, all of her symptoms “miraculously” disappeared. She entered the second trimester feeling both physically and emotionally well and the couple learned they were having a baby girl.

Then, about a week later, the doctor called and told Lesha that she is a carrier of the genetic condition cystic fibrosis (CF). She said the doctor told her that the baby had a 40% chance of having CF — which is not an accurate estimate. Eric would also have to be a CF carrier in order for the baby to have just a 25% chance of having CF. The doctor also told Lesha that the baby had a calcified area in her heart and had three of the 11 markers for Down syndrome.

At the hospital, the doctor told the couple about all of the surgeries and treatments their daughter would go through. But new medications for CF are increasing life expectancy and quality of life. In addition, people with Down syndrome are also living longer, healthier, and more independent lives. Despite these facts, the doctor focused on any possible negatives.

“I’m just scared at this point and she’s laying it on me,” said Lesha. “This is where she says, ‘You know, if you don’t feel that you’re able to deal with a sick child, you can have an abortion. You can return to your life as usual and try again.’ It was like a tug of war in my mind that was happening on our way back home. I’m going into my third trimester and the bad news does not stop.”

READ: When her water broke at 16 weeks, doctors told her to abort her twins. She chose life instead.

Then, during an ultrasound, Lesha’s daughter picked up her fist and punched right where the monitor was and Lesha took it as a sign. “Like she’s telling these doctors, ‘Stop giving me bad news. I’m alive and I’m doing well,” said Lesha. “And I just said, ‘You know what, if my baby is going to be sick, that’s how she’s gonna be born.'”

But Eila Lee was born without any issues or complications.

Despite the doctor saying she would be malnourished, she was born weighing eight pounds. None of the doctor’s predictions about the baby’s health came to fruition. Holding her baby girl, Lesha cried with joy.

“These doctors’ diagnosis of your baby isn’t the end all be all of your child’s life,” she said. “[…] I was gonna abort this beautiful baby girl. I would never have known the love that a mother could have for her child. Even if my child had been born with everything the doctors had said, I still would have loved her.”

Lesha is grateful she chose life and wants other parents to know that no matter what, they will love their child. “Whether a child is sick or not, you love that child,” she said. “Just because a moment in your life is bad, that doesn’t mean that the rest of your life is gonna be bad. You have to say, ‘You know what? This is my situation and I’m gonna own it.”

Today, Lesha is “fully pro-life” and says she “will always support life.”