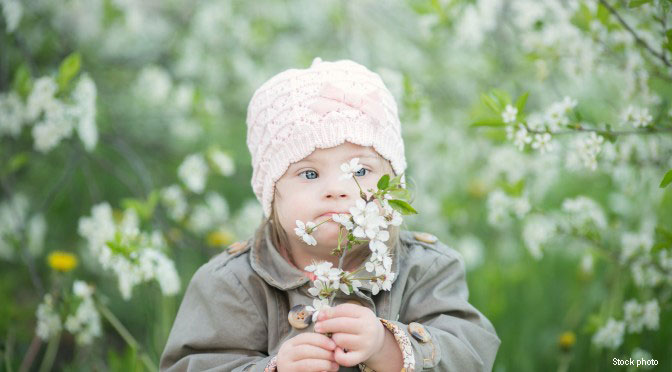 Joelle Kelly was pregnant with her third child when she learned that her preborn baby had Down syndrome.  Frightened and admittedly uninformed about Down syndrome, she found herself staring in wonderment at a text message from a friend which showed an image of a little boy with Down syndrome along with a quote from his parents: “No prenatal diagnosis can predict this kind of happiness.”

Now she’s working hard to show other parents this same truth.After learning that her baby might have Down syndrome, Kelly went to pick up her older two children Tallara and Max. She broke down crying and when her daughter asked her what was wrong, she told them about the possible diagnosis. She retold what happened next to an Australian website:

At the time, the kids went to school with a little boy who had Down syndrome, so they said, ‘We love this little boy. Why are you so sad about our baby having it?’ That really threw me. I was really shocked at how much of a negative reaction I’d had, and I had to stop and think about where it had come from.

While struggling to deal with the diagnosis, Kelly was consumed with worry for her baby, her other children, and the future of her family.

“I bought into the negative stereotypes, the poor statistics, the misguided information and the outdated beliefs,” she wrote. “I believed the doctors when they said our life would be hard and full of appointments. I worried how my other two children would cope with a child who would require more care and attention. But what I failed to see was the light, the hope, the shift in perception, the change in attitude, the push out of my comfort zone into a whole New World.” She and her husband Lewis were told they had the option to abort Josee up to 23 weeks, and say they heard of other people being offered abortion up to 30 weeks. But they refused to lose hope for their daughter’s life.

After Josee’s birth, Kelly started Josee’s Journey of Faith Hope & Love, a Facebook page that shares everyday life with Down syndrome. She has helped about 200 other parents accept their child’s diagnosis and go on to live happier lives than they could have imagined. Now she has launched a new social media project called 100Faces which will share and celebrate the lives of 100 people with Down syndrome. Josee and her dog (Copyright: Josee’sJourney)

“It is basically a narrative photo journey and we believe it will be a great way to powerfully share stories,” wrote Josee’s mom Joelle Kelly.

The first face they group shared is Flynn, an almost 5 month old baby from Australia. His mother Jessica says that having Flynn has made their family “complete.”

“He’s taught me to be more patient and to just enjoy things as they come,” she writes. “It may have taken him a bit longer to start smiling but when he did I felt like telling the whole world and boy what a smile!” Another featured person is Madison, and adult with Down syndrome from Massachusetts.

“I want to inspire people who have challenges in their life; Autism, Down syndrome, mental challenges, any challenge at all. I love to help others that’s my job,” she writes. “That is why I am here.” Madison reminds us that we are all different and we can all be whoever we want to be as long as we push ourselves to achieve our goals.

Kelly and many other parents face pressures from doctors to abort  when their children are diagnosed with Down syndrome prenatally. Josee and the rest of the people with Down syndrome taking part in the 100Faces campaign prove that parents who refuse to abort never regret that decision.