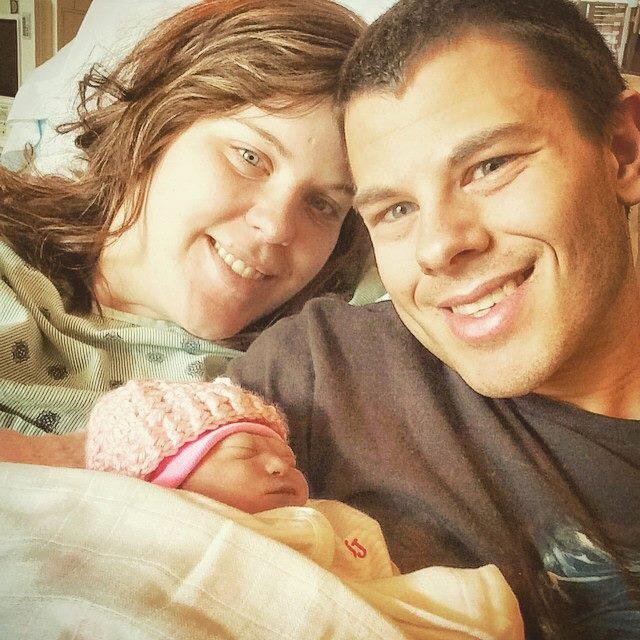 Jacob and Bekah Rush were having a rough summer. Job losses, new moves, family crises had them feeling defeated. But then, happy news arrived in August when they found out they were expecting their first child. According to the couple’s blog, Bekah was so excited she went out and bought baby clothes for both a boy and a girl. It seemed their streak of disappointments was ending.

But by the time October rolled around, the pregnancy, too, would be a challenge for the couple. While at a doctor appointment, Bekah, who had her mother with her, was told some devastating news. She writes:

[The doctor] spoke straight to the sonographer, and they were whispering back and forth. I heard her say, ‘They didn’t tell her anything about it.’ At that point my heart sank to my feet.

The doctor told Bekah that her baby’s neural tube didn’t close and that he or she had anencephaly, which meant her child did not have a brain, a skull, or a scalp. The doctor told her she could carry the baby, or choose abortion, but either way her baby would die. She went home and told Jacob the news. Devastated, the couple felt as though something had been stolen from them.

I couldn’t even begin to understand what to do. I would love to say that I fought for my baby from the very beginning, but in honesty, I can’t. In fact, I couldn’t see the purpose behind carrying. We had two options: terminate and try again after one regular menstrual cycle, or carry. In my mind, and Jacob’s, as well, carrying meant one thing: torture.

Bekah and Jacob questioned why they would continue through the pregnancy. There would be no nursery and no baby shower. Instead, there would be questions from strangers about the baby, and pain knowing that the life moving inside of her would not be able to do so for much longer. They decided that unless God gave them a reason not to, they would abort the baby.

But then, everything started to change.

A chance encounter between Jacob and a woman Bekah calls “M,” led Bekah to a dinner at M’s church.  But before the dinner, Bekah and Jacob were scheduled to meet with the doctor who was to abort their baby. They felt good and were excited to try for another child.

The next day, their new friend “M” who had been praying for them, told them to listen to the song “All of Me” by Matt Hammitt. After that, the couple knew that they could not end their child’s life. Bekah put the car seat and stroller together, and they went out to pick apples and pumpkins, getting three pumpkins – one for each of them.

On the night of the woman’s dinner, Bekah poured her heart out to the women she had just met. After they all prayed with her, Bekah felt a sense of peace. She writes:

I poured my heart out to God, weeping openly in front of a room full of women I didn’t know […]. God moved in my heart that night. He took my burden of overwhelming fear and anxiety. He TOOK it. Let that sink in.

My child had been given a death sentence by the doctors, and I am now willing to prolong the pregnancy. Not only that, but I AM NOT SCARED ANYMORE. (Read that again.) I AM NOT AFRAID! God took my overwhelming fear, my pain and my anticipation of pain, and replaced it with more peace and comfort than I could have imagined.

Bekah and Jacob cancelled the abortion. They spent the rest of the pregnancy working hard to celebrate the life of their child. They had moments of emotional struggle, but never lost faith that God was in control and that He loved their child. They decorated the nursery and had a baby shower, and they prayed for and spoke to their baby whom they named Judah. On their Facebook page, Bekah writes to Judah:

Baby girl, we love you more than we have ever loved anyone, and I pray that you can feel it and know just how much we want to keep you. Judah Kate, we are so proud of how hard you have fought so far! […] We are so grateful for the time we have gotten to spend with you so far.  […] Mommy and Daddy will love you as much and as hard as we can no matter how long you are here! On the morning of March 8, Judah Katherine Rush was born. Jacob held her and looked in her eyes, and then Bekah laid next to her mother. Within a few moments, Judah was gone. Jacob wrote on Facebook:

It breaks our hearts that we had to say goodbye so fast, but we know we’ll see her one day again. And we know that God is right here right now weeping with us. […] His heart is broken just like ours, and he is here to take care of us […].

Bekah, Jacob, and Judah spent a couple of days in the hospital together, and on March 13, they held a memorial service to celebrate Judah’s life.

In her daughter’s honor, Bekah is donating breast milk for babies in need. Though the days ahead will be difficult, Bekah and Jacob are happy to have had a few moments with their daughter and look forward to seeing her again.