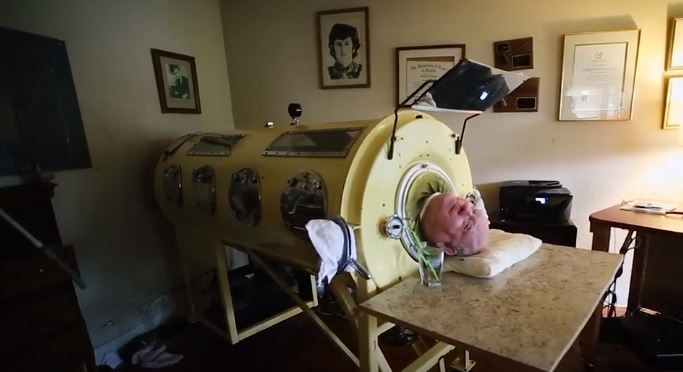 Sixty-eight years ago, Paul Alexander contracted polio during the biggest polio outbreak in the United States. It was 1952 and Alexander was only six years old. The disease paralyzed him from the neck down within a matter of days and he required the use of an “iron lung” to keep him alive. Despite nearly seven decades confined to the machine, he has led a successful life, proving that life with a disability is worthy of living, and that everyone should have the right to life.

“I was just a kid like everybody else,” he said in a video from Gizmodo. “I began to feel a little bit ill. When Mom saw my face, she knew. She put me immediately to bed. Over the next five days, I lost everything – couldn’t move, couldn’t walk. And finally, the last day, I couldn’t breathe. My diaphragm was gone, destroyed. My body muscles were gone, destroyed. Which left me in the iron lung for the rest of my life.”

Just a child, when he woke up in the hospital in the iron lung, Alexander was confused. Realizing he couldn’t move or speak due to a tracheotomy, he was obviously frightened. He was in the hospital for 18 months and as time went on, he knew he had to make a choice.

“The early part was very, very scary, but I’m an Alexander,” he told Catholic Online. “My parents taught me to have a lot of pride and self-respect, and God taught me to believe I could do anything I dreamed of – and I did. So instead of letting Polio break me or kill me, I fought hard. The more it would knock me down, the angrier I would get. That anger, I’ve often said, is what kept me alive.”

In 1971, after years of his parents’ careful care and dedication, Alexander decided to head off to college at age 25. His parents packed him and his iron lung up and brought him to the University of Texas in Austin. He had hired another student to meet him and care for him, but that student didn’t show up. It was three days before he would be found. Three days with no ability to move.

“I was just lying there, and it was hard,” he said. “I had gone from mom’s best cooking in the world, and being taken care of perfectly, to zero.”

After being found, two men helped care for him until school started. That’s when a registered nurse came to take care of him, saying that God had sent her.

Alexander went on to earn three degrees and became a lawyer with his own practice. He says his clients see the iron lung and it ignites a deep belief in his abilities. “I’ve had literally thousands of clients who don’t worry about the iron lung. They come into my office and they say, ‘What is that?’ And I tell them what it is. And they say, ‘My God, if he can handle that, and he can find [his] way to this point, then he’ll be one heck of a lawyer.'”

Alexander has traveled the world with his iron lung and even wrote a memoir about it. To survive when the power goes out, Alexander found people willing to hand pump a generator to keep him alive. And when he feared his iron lung would break, he found mechanic Brady Richards, who had an old iron lung in his garage and used the parts from it to fix Alexander’s iron lung.

He has even taught himself to breathe, allowing him to remain outside of the lung for a limited amount of time.

“It was years and years and years before I developed another way of breathing,” he told Catholic Online. “It’s a task that requires a lot of energy. But I was challenged to do it, I did it, and it took me a year to get up to three minutes.

“What I do is I use my throat to gulp. I gulp in breaths and swallow them into my lungs.”

To say life has handed him challenges would be conservative, but Alexander continues to rise to them. Alexander’s life has been marked by moments both tragic and triumphant.

In this post-Roe v. Wade world we live in, any child in the womb receiving a prenatal diagnosis of a condition which would leave them unable to walk or move would immediately be placed on the abortion chopping block by doctors. Their scared parents would feel pressured to terminate their child rather than allow him to live a life of challenges. But Alexander, without trying to, shows us that life is always worth living.

“My parents taught me to use my intelligence and my energy to be productive,” he said. “I’ve never thought of myself as a cripple. That’s the word I choose to use because I think it covers the ground in most people’s perceptions. I’m not disabled. I’m not handicapped, and I’m not limited. I’m crippled, at least in most people’s mind, except mine. I’ve experienced everything in life that you have, and more. I’m Paul Alexander, human being.”