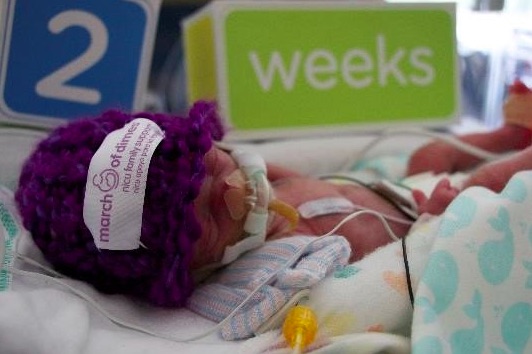 Pampers, which has made waves with pro-life advertising in the past, has introduced a new diaper to help nano preemies – babies born weighing less than two pounds. The “Flat Diaper” is designed without tape, elastic, or fragrance in order to protect the premature babies’ extremely delicate skin — babies so young that they are unable to actually wear a diaper. The new Flat Diaper also features a wetness shield to prevent run-off. Try not to cry when you watch Pampers’ promotional video:

“For more than 40 years, Pampers has been proud to be in the corner of all NICU nurses and preemie babies, providing innovative solutions in support of their unique needs,” said Erica Bardeau, Brand Manager, North America Baby Care, P&G. “In 2002, we were the first major diaper manufacturer to create a diaper for premature babies. Since then, we have developed numerous innovations, including diapers ranging from size P1 to P3 for micro-preemies, to care for all babies, even the littlest fighters.”

Amillia Taylor – a premature baby born at only 21 weeks gestation — and survived.

These “littlest fighters,” as Bardeau refers to them, are children born as early as 21 weeks gestation. As technology improves, these children have increased chances of surviving. In fact, a study published in the New England Journal of Medicine in 2015 revealed that 23 percent of infants born at 22 weeks survive, and when doctors are more proactive in helping these babies, their chances of surviving rise 18 percent.

Meanwhile, it remains legal in the United States for children to be aborted well after 21 weeks gestation for any reason. Aborting a child who has been growing and developing in his mother’s womb for more than five months involves the cruel practice of dilation and evacuation, in which an abortionist literally removes limbs from the child, who is capable of feeling pain. People like Nik Hoot have survived this horrific procedure, living life without their limbs. Former abortionist Dr. Anthony Levatino describes the brutal D&E abortion in the video below:

The pre-term birth rate is now at 9.8 percent. Pampers, which is donating a box of Flat Diapers to every Neonatal Intensive Care Unit in the country, is doing an excellent job of illustrating that we have a duty to care for these extremely young babies and treat them as the human beings they are, both inside and outside of the womb. In a world in which we pick and choose which children we save and which children we actively kill based on their location, it’s important that companies with such a large media presence like Pampers continue to spread the world that these little fighters are worth fighting for.