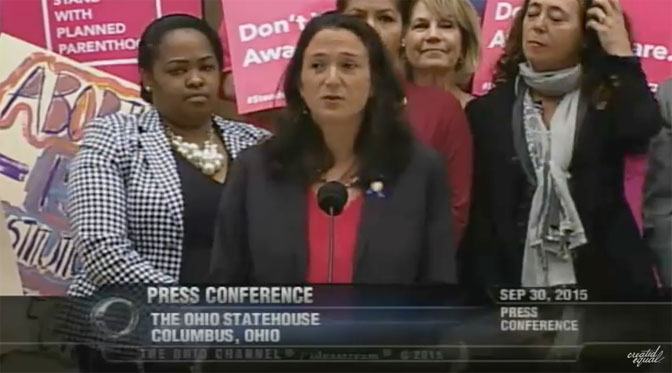 Our friends at Created Equal are sounding the alarm on H.B. 408, a bill proposed in Ohio they warn would essentially create “censorship zones” around abortion facilities, threatening legal penalties against any pro-lifer who dares to exercise his or her First Amendment right to protest abortion.

The legislation provides that “Any employee of a health care facility who is subjected to harassment or intimidation may commence a civil action for” not only reasonable grievances such as physical injury or property damage (which are already illegal), but also “harassment,” which the bill defines as:

[A] knowing and willful course of conduct that is directed at one or more employees of a health care facility, that would cause a reasonable person to be seriously alarmed, annoyed, or harassed, that in fact seriously alarms, annoys, or harasses the employee or employees, and that serves no legitimate purpose.

Any pro-lifer who runs afoul of the statute within fifteen feet of the property would be “liable to the plaintiff for damages in the amount of five thousand dollars.”

In response, CE is circulating a petition to the state’s Republican House Speaker, Cliff Rosenberger, urging him to stand up to HB408:

We urge you to oppose House Bill 408 and fulfill your duty to the constitution and the rights of all Ohioans. The sole objective of this bill is to criminalize the unpopular speech of certain Ohioans. The First Amendment, however, protects the right of pro-life Ohioans to share accurate information about physicians who perform abortions, regardless of the popularity of that information. American lawmakers and constitutional scholars—throughout our nation’s history—stand together in almost unanimous agreement that speech of this nature—however unpopular—is the very kind of speech for which the First Amendment of our Constitution was ratified to protect.

This bill, with its undefined terms such as “harass” and “follow,” is an invitation to unconstitutional enforcement by police officers who aren’t adequately trained in the area of First Amendment freedoms. Unlike similar laws that are currently in place to protect victims of domestic violence and stalking, this bill is being pushed to advance a political agenda. The lack of any saving language that prohibits the civil and criminal penalties from being imposed on constitutionally protected activity virtually guarantees that, if enacted, its provisions would be abused.

Indeed. Free speech by its very nature is “alarming” and “annoying” to people who disagree. That’s the entire point of protecting it and safeguarding it in the Constitution, because free and meaningful discourse about America’s problems can’t thrive if those in power are free to silence speech they fear—particularly when laws give them the discretion to subjectively define for themselves how a “reasonable person” would interpret speech or what constitutes a “legitimate purpose.” This is why the Supreme Court unanimously struck down Massachusetts’ 35-foot abortion clinic buffer zone law last year.

Not that pro-aborts care. Evoking memories of how Planned Parenthood didn’t pause to ask themselves why not even SCOTUS’s most die-hard abortion supporters could rationalize siding with them on the buffer zones before throwing a temper tantrum, just watch Ohio Democrat Rep. Greta Johnson admit that the specific purpose of the bill is to stifle Created Equal’s “Killers Among Us” project, which seeks to publicly expose abortionists and their crimes—which has saved lives by forcing at least two abortionists to quit so far:

Women […] should be able to access healthcare without fear of harassment, from doctors who likewise have no fear of harassment to provide that care. The fifth bill will create a right of action for those targeted by anti-abortion protesters. I will not stand idly by while Wright State doctors have trucks parked outside their homes that say “Killers Among Us.” That must end. I have been awed in the last nine months by the attacks to a safe, legal abortion. It is indicative of the war against women. We are not damsels in distress tied to railroad tracks. We are the train, and we are carrying the message that we will not tolerate further infringement of our constitutionally protected right to abortion care.

So to this bill’s proponents, protecting a fake constitutional right requires politicians to infringe upon real constitutional rights. That should be all the motivation pro-lifers need to sign Created Equal’s petition and fight to protect those fighting for life from pro-abortion censorship.