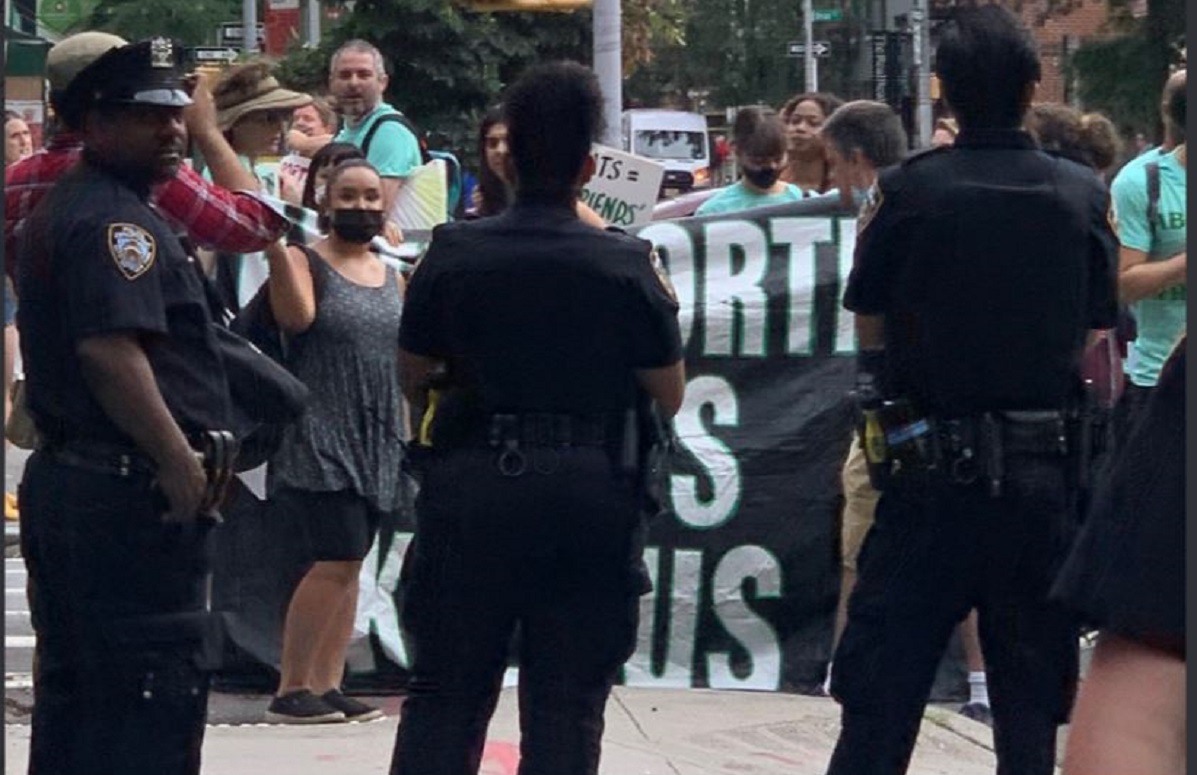 “Thank God for abortion.” Those are some of the chants and signs a group of a little under 100 pro-life Catholics faced on the streets of Brooklyn on Saturday morning. It was the third Witness for Life there, where the morning starts with Mass at St. Paul’s Church, and continues with seven blocks to Planned Parenthood, which is in an office building. Locals might not even know it is there, save for the abortion escorts in pink outside — and the ruckus [the morning of July 10]. A group called NYC for Abortion Rights orchestrated a counter protest. Last month — these are done on the second Saturday of the month in Brooklyn — the protesters got into the face of Fr. Fidelis Mochinski, CFR, and tried to keep the small group from walking. (More here about that.) This week, the NYPD was prepared and was able to keep the two groups separated. It took two hours, however to walk the seven blocks because of the resistance of the protesters.

They’ve formed a blockade to keep us from our prayer procession. #WitnessforLife pic.twitter.com/IRPteDx3Om

We just came to pray. Our friends have their prayers, too. #WitnessforLife pic.twitter.com/eDt7SHhIb2

Even while we were at Mass, the protesters were out there hollering. Sometimes you couldn’t make out what they were saying, but most of it involved celebrating abortion and hating us. At one point while we were praying, a man passing by hissed: “You’re the worst.”

They have a particular hatred for Fr. Fidelis because he sometimes — though never in New York — makes use of civil disobedience by going into the clinics and offering roses to women and refusing to leave until the abortions stop. We’ve had legal abortion for a half century in the United States. No wonder there is violence on the streets. I fear we’ve become comfortable with abortion. Most people aren’t chanting Thank God for Abortion, but are we doing anything to stop it? Each and every one of us? Pray. Supporting a crisis pregnancy center. Make sure the women in your life know that they can come to you if they face an unplanned pregnancy.

Abortions happened today in America. Multiple times just this week, I saw young women and girls going in for abortions and leaving. This is a travesty, and it’s legal and we look away. I still want to think we’re better than this. I was humbled to be able to pray with others who know we have to be.