Noah is an exceptional little boy. Not only does he have parents who love him endlessly, and an adorable smile, but just by existing, he has changed (and saved) lives. And he and his father Rick have only just begun. 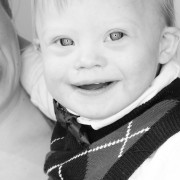 After his parents were told that Noah has Down syndrome, his dad started educating the world about the genetic condition and about his son. He started the blog NoahsDad.com, which has quickly climbed the ranks as one of the top parenting blogs around. This little boy has over 27,000 fans on Facebook! And while his father has faced some harsh words from readers (“I wouldn’t want the burden of having a child with Down Syndrome. I would have terminated the pregnancy.”) and unsettling advice from doctors (“I’m going to prescribe you some antidepressants.”), he has also experienced the joy of knowing that his son’s life and his own words have saved at least one life, as one expectant mother wrote:

I just got the phone call last night that my blood work was abnormal and my child may possibly have Down’s Syndrome. After the initial shock and confusion I buried myself in research looking for more info and a better perspective on what this could possibly mean. While my first thought was to abort if DS was confirmed all that has changed thanks to your story and others like yours.

Amazing how one little life can have such meaning and importance and make such a difference in the world in such a short time. But included in that joy is the knowledge that over 90% of children like Noah will never be born, because they are killed while still in their mothers’ wombs. Rick shared his thoughts on this on National Sanctity of Human Life Day. He writes:

… every time you see one Noah (my son) there’s 9 Noah’s you don’t see as a result of people not wanting the burden. In other words, if you’re a baby with Down syndrome, your mother’s womb is a very dangerous place for you. And it breaks my heart.

Rick believes that our society has made it so that it has become easier and easier to murder children with Down syndrome and other conditions. He says our society is on a mission to exterminate people with disabilities, and it haunts him. But he knows that there are things we can do to help stop it.

He believes in the power of prayer to change the hearts of parents, doctors, and politicians who are deciding whether or not people should live or die.

He also thinks we should each take the time to reflect on our own “burnden-ness.” Each of us has struggles, and each of us has been a burden to someone else at some point in our lives, even if just for a moment. Each of us has frustrated our parents, teachers, or spouses. There isn’t a single person on this planet who is perfect and has lived a life without hardships or mistakes. We need to remember this and keep it close to our hearts when we are looking at people whom we may have deemed “unworthy” or people whom we feel pity for.

And finally, Rick wants families like his to tell their stories. Share their lives with the world in any way that they can. Through social media, through advocacy groups, by volunteering to talk with parents whose children are facing the same diagnosis as their children, because change starts with individuals. And once scared parents see the future lives that their children can and will have, those cold statistics from the doctor won’t seem so bad after all.

Rick is a man to be admired. He has taken on a great challenge: the challenge of changing the world one heart at a time. But something tells me that, with a cutie like Noah backing him up, the two of them (and Noah’s mom, of course) are going to make some big waves in our society. As Rick says:

My great prayer is that God will change the hearts of our culture. That our culture will come to understand the value of human life (even little bitty lives.) That more children like my son will be brought to full term. That we will stop aborting children in the womb for any reason…especially simply because they have an extra 21st chromosome.

1 out of 10 is pretty bad odds, but thankfully God likes bad odds.