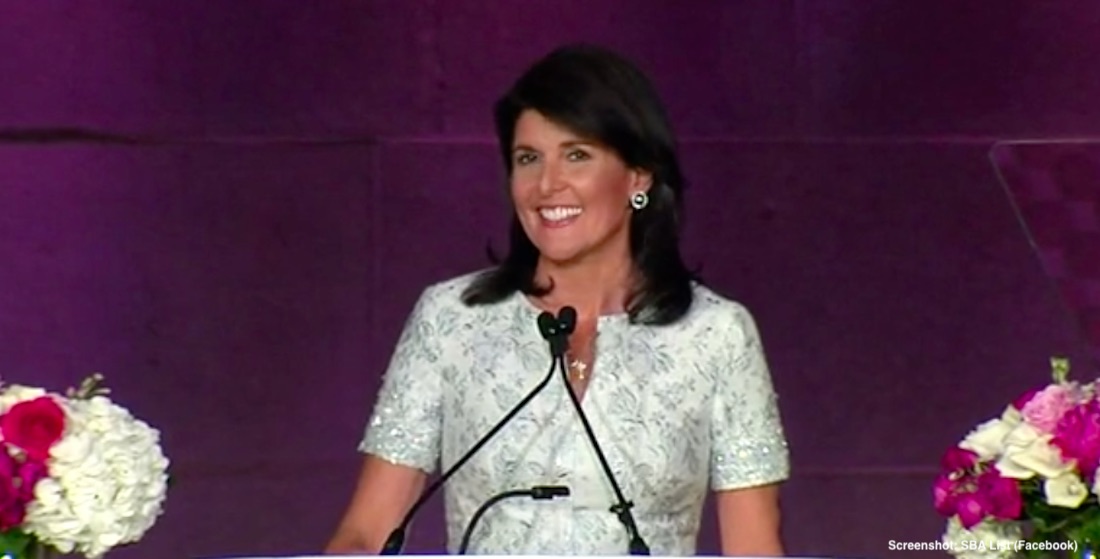 Nikki Haley, former US Ambassador to the United Nations, called out the forced conformity of abortion supporters in the spotlight during her address as the keynote speaker at Susan B. Anthony List’s Campaign for Life Gala in Washington, D.C. on Monday.

When discussing her accomplishment of banning late-term abortion as governor in the state of South Carolina, Haley said progressive feminists attempted to erase her and de-legitimize all pro-life women by calling them “traitors to their gender.”

“Unfortunately, many on the left use the abortion debate to divide women and demand conformity. They do this in the name of feminism, but that is not real feminism,” said Haley. “The idea that women must adhere to a particular set of values is one of the most anti-women ideas in today’s culture. It is a rejection of the ideas of equality and tolerance that the women’s movement is supposed to be all about.”

But conscious of her opponents on the left, Haley attempted to model that tolerance that she hoped for herself and others like her. “As a pro-life, female governor, I was blessed with a unique platform, and I made every effort to use it appropriately — not to lob attacks at people who disagreed with me, not to diminish the other side, but to re-frame the debate,” Haley said. Being pro-life is not advocating against women, she said. It’s promoting “a baby’s right to live, the most basic right there is.”

Haley has personal reasons to be pro-life. In her speech, she talked about her husband’s difficult childhood in foster care. “Foster care can be amazing, but it was not kind to Michael and his siblings. It was unkind. Luckily, when Michael was five, he and his sister were adopted by a kind, loving couple, who couldn’t have children of their own.” Haley added that she often thinks about what might have happened if his biological mother or adoptive parents had chosen a different path. Because of this, she said, “I am pro-life because I get to spend every day with my husband knowing that I am blessed.”

READ: Why do pro-life women get hate? Simple: They’re winning

Haley also opened up about her and her husband’s struggles with infertility. “Like so many couples, we struggled for many years, riding a roller coaster of false hopes and painful disappointment.” When she finally held her babies for the first time, she understood the preciousness of life.

“These experiences, the good and the bad, solidified for me what I had known long ago, intellectually: that each and every life is a gift from God, that so many loving families want more than anything to raise and love a child. I can’t stomach the idea that we wouldn’t do everything in our power to protect and nurture those lives.”