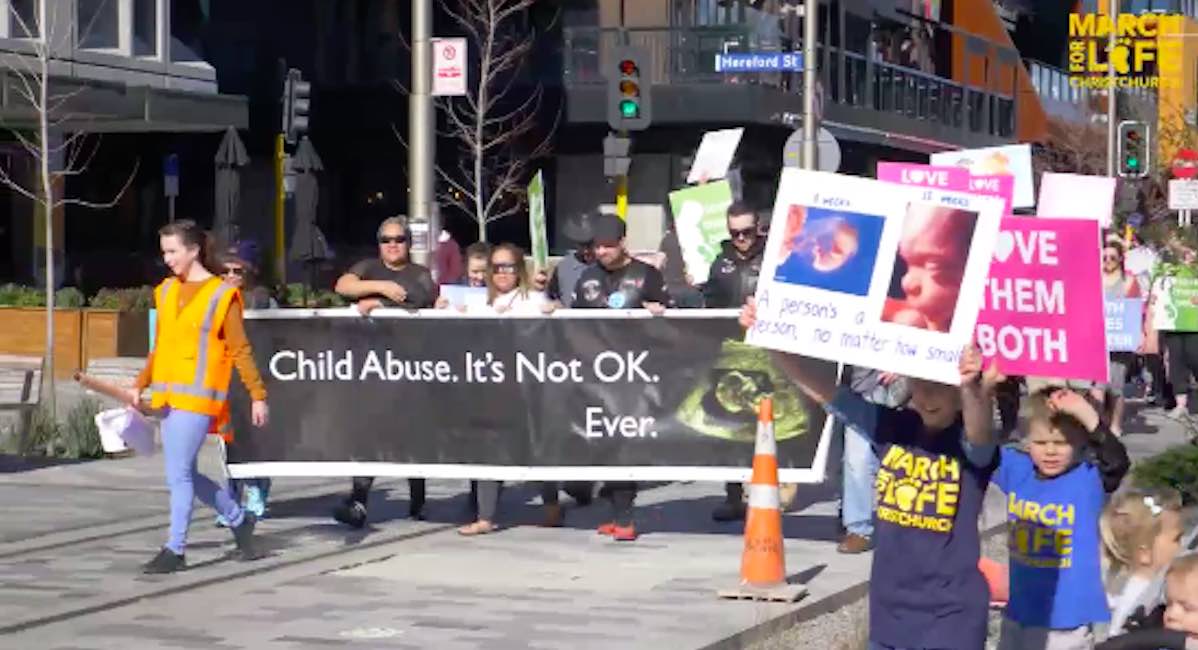 (Right to Life UK) Over 1,000 people took part in a pro-life demonstration in New Zealand against the extreme abortion legislation passed by the Labour Government earlier this year.

Campaigners participating in the Christchurch March for Life carried signs reading “Both Lives Matter” and “Love them Both”.

Earlier this year, New Zealand MPs voted to introduce the most severe abortion law in the world by 68 votes to 51.

The new law scraps the previous 20-week limit and will allow terminations on-demand, for any reason, up to birth.

Additionally, there is now no requirement doctors must be involved with an abortion ‘procedure’ and MPs – including Prime Minister Jacinda Ardern – voted against an amendment requiring medical care for babies born alive after a ‘failed’ termination.

Now, just four-months after introducing the extreme abortion law, a New Zealand Labour MP has introduced a Bill to make it even worse.

The proposal states this will be done through the creation of so-called “safe areas” up to 150 metres from any part of an abortion facility, with a fine of up to $1,000 for anyone deemed to be breaking the rules.

In light of extremely low public support and falling support from MPs, Jacinda Ardern’s Government rushed the final stages of the Bill’s progress through Parliament while politicians, the media and the rest of the country were distracted dealing with the coronavirus pandemic.

This included progressing the final sitting of the committee stage and the Bill’s third and final reading through parliament on the same day.

Polling conducted by Curia Research, revealed strong opposition to the new law by the public in New Zealand, and in particular by women.

Only 2% of women said they support abortion being available on-demand right up to birth. Meanwhile,  93% of women opposed sex-selective abortion being legal and 94% of women supported the previous legal standards for abortion providers and premises.

In addition, over 40,000 New Zealanders signed a petition urging the Government to hold a referendum, giving citizens an opportunity to repeal the extreme law.

To put this in perspective, if New Zealand had the same population as the UK, and the same proportion of the population signed the petition, this would equate to well over 500,000 signatures.

The petition’s author, Pamela McIlwraith, has said: “In my view the abortion legislation was rushed through Parliament while the entire country was distracted with COVID-19.

“I think there needs to be a referendum so the people can have their say—MPs should not be able to vote against giving the people their say in such important matters, especially a law legalising full term abortion.”

Ahead of the election, New Zealand Prime Minister, Jacinda Ardern, has been criticised by an MP for supporting the introduction of extreme abortion legislation.

In a Facebook post last month, Hipango stated, “This recent stance by the PM is rank and riles me as a woman who is a mother and has also advocated for children’s welfare all my professional working life as a lawyer.”

With the 2020 election just several weeks away, Labour MP and Justice Minister Andrew Little leapt to Jacinda’s defence and said there was “no such thing as full-term abortion, people who say that are idiots.”

However, National list party MP Agnes Loheni, who was on the select committee for the abortion legislation, said the legislation “definitely” supports abortion up to birth.

“What is written in our legislation definitely supports that you could have an abortion post 20 weeks up to birth. If you look at the words yourself – there are no hoops to jump through because it is so broad and ill-defined. In my view the unborn child now is the equivalent of having an appendix removed,” she said.

She added that many MP’s who were for the bill changed their vote on the third reading because they felt uncomfortable with the “loose terms around the criteria for late term abortions”.

Hipango was also supported in her comments against the Labour Prime Minister by fellow National MP, Simon O’Connor. In the comment section of Hipango’s Facebook post, O’Connor said the Government had “pushed through” the law ahead of the COVID-19 lockdown and that aborting a full-term baby “sure has” been legalised.