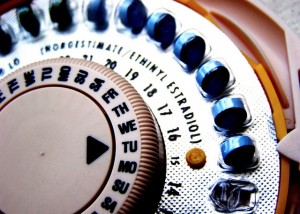 The American Academy of Ophthalmology revealed this week that there is a new reason to avoid birth control – the risk of losing your eyesight.

Women who take oral contraceptives for three or more years have an increased risk of developing glaucoma, a group of eye conditions that is one of the leading causes of blindness. The findings come from a new, not yet published study of 3,400 women aged 40 and over who participated in the U.S. National Health and Nutrition Examination Survey between 2005 and 2008.

The study discovered that women who take oral contraceptives, no matter the brand, for at least three years have double the risk of developing the condition, which can cause permanent blindness if not treated.

The study did not reveal the exact reason why birth control can cause glaucoma; however, previous studies show that estrogen plays a role in the development of the condition. Many birth control pills contain estrogen.

In light of these findings, researchers behind the study, including those at the University of California, San Francisco, are advising doctors to inform their patients of the increased risks associated with birth control. In a news release, Dr. Shan Lin of UC San Francisco said:

Glaucoma now joins cancer and blood pressure on the list of major health problems linked to oral contraceptives. According to the Mayo Clinic, taking birth control for long periods of time increases a woman’s risk of high blood pressure, cervical cancer, liver cancer, and possibly breast cancer. In fact, estrogen-progestogen oral contraceptives (including the pill) are classified as a Group 1 carcinogen by both the World Health Organization and the American Cancer Society. Being labeled as Group 1 means that the item is “carcinogenic to humans” rather than “possibly carcinogenic to humans,” as Group 2A is. Only a little more than 100 items are classified as “carcinogenic to humans,” so common forms of birth control find themselves in a dangerous class.

In addition, the Mayo Clinic says birth control pills can also increase the risk of cardiovascular disease in women over 35 who smoke.