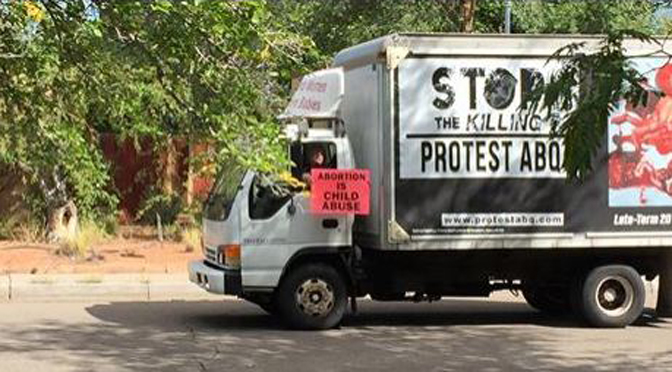 New Mexico pro-life group ProtestABQ is taking their “truth truck” into the neighborhood of pro-abortion Albuquerque city council candidate Pat Davis to show the truth of abortion, which he supports.

The council hopeful called the tactic ‘intimidation,’ adding, “I don’t believe for a minute that City Hall has any business getting between a woman and her doctor on medical issues, so we’ll just have to agree to disagree.”

Davis complained about the protest on his Facebook page, writing:

For the second day in a row, my neighbors (and their kids) have endured these protests because I don’t believe city council has any business getting between a woman and her doctor.

Everyone has a right to participate in the political process, but this is unnecessary. Help me send a message by voting early (open now!) and volunteering to turn out our neighbors to vote. While some liked the post and approved of Davis’ pro-abortion position, one resident asked the Democrat a pointed question, writing, “Reality is gruesome to look at sometimes. Why are the images of what is going on more offensive than the actual activities?”

Shaver says the pro-life group is always polite and cordial while driving the truth trucks but that the point of the graphic messages is that Davis champions archaic practices such a late-term abortion.

Shaver called a vote for Pat Davis “a vote against the women and children of Albuquerque.”