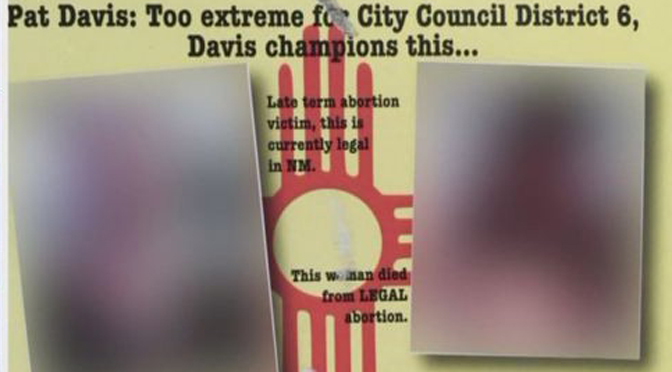 The mailers were meant to be graphic, says Bud Shaver of Protest ABQ, a pro-life organization which paid for the mailers. Protest ABQ has worked tirelessly in New Mexico to close the infamous Southwestern Women’s Options late-term abortion facility operated by abortionist Curtis Boyd. They have also worked to pass strict abortion laws, educating the public with truth trucks that show what abortion does to unborn babies. Shaver states:

While Davis claims to be “progressive” he really champions archaic practices such a late-term abortion. Davis will not bring progress to ABQ but instead, he will ensure that barbaric late-term abortions will continue in our city.

A local news outlet reported on the controversial mailers but censored the images (shown above). The mailer states, “Pat Davis: Too extreme for City Council District 6, Davis champions this… Late term abortion victim, this is currently legal in NM. This woman died from LEGAL abortion… and you can expect more of this if he’s elected.”

An uncensored copy of the mailer, containing an image of a very late term aborted baby alongside the image of Marla Cardamone, who died during a legal abortion, can be seen here (warning, side two is extremely graphic):

In an e-mail to supporters, Pat Davis’s campaign responded:

This weekend the ugly attacks against Pat hit a new low when an extreme anti-choice group inundated our district with mailers containing “graphic and disgusting” images. Today’s anonymous, negative attack message was graphic and unnecessary. It was designed to be in mailboxes on Saturdays when kids are home to pick up the mail and intended to keep voters away from the polls.

Bud Shaver told Live Action News that he has received some vulgar complaints from citizens about the graphic mailers, one of which read in part, “…instead of wasting your money spamming my inbox, maybe you could spend your money on feeding poor kids that have already been born….” The rest of the message could not be published due to profanity.

But Shaver was unwavering, stating, “The residents of Albuquerque deserve to know where aspiring politicians stand on pre-born child killing.”

Tara Shaver, also of Protest ABQ, emphasized that the group’s goal is to make sure the electorate knows what they are voting for by electing Davis:

Pat Davis unashamedly supports the killing of innocent pre-born children and Protest ABQ will oppose him and expose who he really is to his constituents.

Instead of being upset with us, those in his community who received postcards clearly stating his position should direct their anger toward encouraging him to change his position.

The election for Albuquerque City Council will be held October 6th.