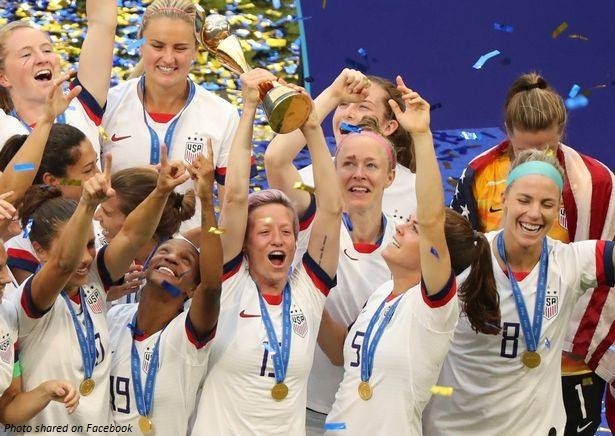 Natural family planning, or NFP, is increasingly becoming an attractive option for women and couples alike as they rethink conventional contraceptives. Unlike birth control, NFP can be used to track a woman’s monthly cycle, not only avoid pregnancy, but to help couples get pregnant, and to help women better understand their own bodies. And one app that helps with this sort of tracking has been credited with helping the US Women’s National Team with the FIFA World Cup.

The women’s soccer team thrilled fans across the country as they not only became world champions, but also scored the most goals ever in a Women’s World Cup. According to the coaches, using NFP was crucial. “I feel like it’s one of many strategies that we deployed that helped us win,” Dawn Scott said in an interview with Good Morning America. “I feel like [the U.S. is] leading the way on this.” Scott, the high performance coach for both the USWNT and the National Women’s Soccer League (NWSL), had been tracking her players’ cycles for years, but as the World Cup approached, she realized she needed a more advanced and individual approach.

“For a few players, I always noticed that just before they started their cycle, their recovery fatigue was increased and their sleep was less,” she said. “I was noticing it for three or four players and thought, ‘We’re six months out from the World Cup, how we can help that?'” So with the help of Dr. Georgie Bruinvels, a research scientist, the problem was solved, thanks to Fitr Woman, an app Bruinvels created that tailors workout schedules and nutrition advice based on their unique monthly cycle. Each player filled out an individual survey, explaining the timing of their cycles, the symptoms they felt, and how those symptoms impacted their playing. That information was used to keep the athletes in peak condition as they competed for almost two months for the World Cup.

“We could see what [menstrual cycle] phase a player was in and what some of their symptoms were,” Scott explained. “I would just text or say to a player, ‘Hey you’re in phase three and we know you get disrupted sleep, so make sure you do x, y and z.'”

This outlook was lauded by several medical professionals, who said it is long overdue for women who compete in sports. “We do know that there are parts of the cycle where women may have less ability to sleep and may have different eating habits,” Dr. Richard Beckerman, chairman of the Department of Obstetrics and Gynecology at Sibley Memorial Hospital in Washington, D.C., explained to ABC News. “But just as we find people are affected differently by different things, it can be very variable.”

ABC News chief medical correspondent and OB/GYN Dr. Jennifer Ashton agreed. “For anyone who understands the complexities of women’s health, the fact there can be fluctuations in physical or mental stamina, or changes in sleep or dietary behaviors corresponding to changes in a woman’s menstrual cycle come as no surprise,” she said. “The ability to individualize behaviors that have the potential to optimize athletic performance exists and absolutely should be considered when dealing with any athlete, male or female.”

She added, “The fact is, female athletes are biologically, hormonally and physically different, and the sooner that reality is embraced instead of resisted, the more potential exists for that athlete to optimize her training behaviors. An app that tracks the menstrual cycle absolutely has the potential to improve a female athlete’s behaviors.”

In Scott’s case, she wanted to go public to break the taboo surrounding menstruation. “For the 15-year-old girl who doesn’t have the support of a national team, I want to make it so she can talk about it with a female coach and a male coach,” Scott said. “We need to make people aware of it and not embarrassed by it. This is physiologically what female athletes deal with.”

While NFP has long been maligned, especially by the abortion industry, pro-lifers have been its strongest advocates over the past several decades, and it has only grown in popularity. The reality is, NFP is more effective than women are often led to believe. And though traditional birth control comes with serious side effects, which roughly half of women have “serious trouble” with, NFP has no side effects — and, as the USWNT shows, it can be used for more than just avoiding pregnancy.

Stars from the “Bachelor” franchise, as well as other celebrities, have likewise been increasingly open about using NFP apps that help them understand their own bodies, how they are affected by their cycle, and how it has helped them to both avoid and achieve pregnancy. It is this kind of information that empowers women, giving them the ability to see how their hormones and cycle affect them, as well as to take charge of their fertility without potentially using an abortifacient or feeling like they must subject themselves to unpleasant and potentially dangerous side effects.

Empowering a woman begins with educating her about the amazing way her body and her fertility works.