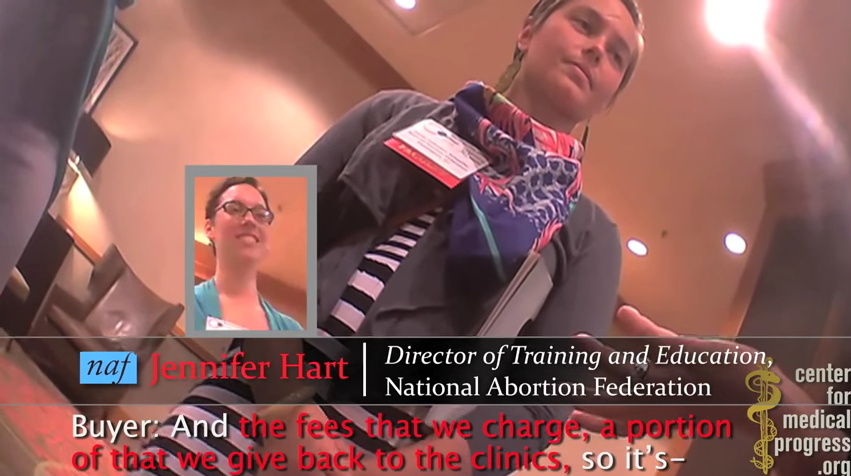 A disturbing new video released by the Center for Medical Progress alleges financial incentives for abortion providers that harvest the body parts of aborted children. The admissions reveal how the National Abortion Federation and its members “know somewhere” where middleman procurement companies can obtain quantities of salable aborted fetal organs.

Planned Parenthood’s Deb Vanderhei, the national director of the Consortium of Abortion Providers, admits on tape that NAF and the abortion giant are “trying to figure out” how to manage renumeration in order to avoid making the front page of the New York Times, noting that the “headlines would be a disaster.” NAF also reportedly has a partnership with StemExpress, a for-profit fetal body parts wholesaler based in California.

In the video, NAF’s training and education coordinator, Sandy Fulkerson, floats the idea of a “group purchasing program” offered through NAF membership, where participating abortion facilities would supply aborted fetal tissue to buyers, and then split the profits. Fulkerson admits the abortion group “knows somewhere” where large quantities of fetal tissue are “available.” Another NAF supporter then chimes in that the financial rewards are a “win-win” for both parties.

“We have a group purchasing program through our membership,” Fulkerson admits. “We have bio disposal companies that work with us, so it seems like this would be a really great option to be able to offer our members, as well.”

When referencing the financial incentives for abortion facilities, Fulkerson laughs and says, “It definitely sounds like something our members would be really interested in.” She then invites investigators to attend a conference in San Francisco, CA, where they can connect with abortion providers who are interested in fetal tissue procurement.

In a statement, David Daleiden, project lead of the Center for Medical Progress, noted that the National Abortion Federation has been eager to profit off the body parts of aborted babies from the beginning.

From the very first moment the National Abortion Federation met purported baby parts traffickers in our investigative journalism study, NAF was eager for them to attend its meetings and pay its member clinics for fetal body parts. Multiple Planned Parenthood executives and the leadership of StemExpress told our investigators many times that NAF was a key partner for fetal tissue harvesting.

The fact is, the National Abortion Federation is a key accomplice in Planned Parenthood and StemExpress’ scheme to profit off baby body parts, and for this reason they are desperate to suppress the freedom of the citizen press and cover up the evidence of their illicit dealings.

The video by the Center for Medical Progress is the latest in a series of undercover tapes revealing the abortion industry’s hand in the harvesting of fetal body parts.

NAF is seeking a permanent gag order against CMP to prevent the release of footage from their annual conferences in 2014 and 2015, claiming fraud.