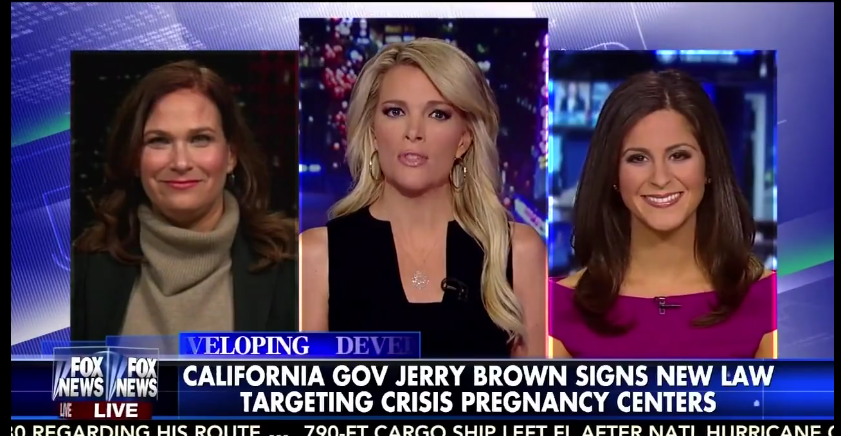 On Tuesday night, Live Action President Lila Rose faced off with NARAL President Ilyse Hogue on “The Kelly File.” Rose and Hogue debated California’s new law, which forces pregnancy care centers to refer women to abortion facilities where, in some cases, the state will pay for their abortions with taxpayer funds.

California is forcing pro-life pregnancy resource centers to promote abortion. This is a betrayal of free speech, and a intrusion of government into freedom of conscience. I share with Megyn Kelly on Fox News.

Hogue made a very curious statement, considering her absolute refusal to support Women’s Right to Know Acts (more on that later). She said, “Regardless of how any individual feels about abortion, we can all agree that women do better with access to information.”

1. Women in the U.S. know abortion is legal.

This is a major reason Hogue’s claim falls flat on its face. Women are constantly informed that abortion is legal in the U.S. This is not a surprise. It is not a newsflash. Hogue needn’t pretend. Women already know they can obtain an abortion in California – and this knowledge is available to them without requiring pregnancy centers to post public signage that amounts to no more than a state-required advertisement.

As Rose stated, the California law is flat-out “forcing them [pregnancy care centers] to promote abortion” – not just inform women that the option exists.

At one point, Megyn Kelly asked Hogue: “Would you be okay, if you think more information is better, with a mandate that the abortion clinics have to tell the women what their fetus looks like before they abort it and what will happen during the abortion procedure?”

Fair question, if the goal is giving women access to more information. Yet Hogue refused to even attempt an answer.

Kelly’s question is one news anchors and media outlets should force NARAL, Planned Parenthood, and their kin to answer. Why is information telling women where they can obtain a free abortion the only information you support giving them?

(As an aside, this story provides just one personal example – of many – regarding how much time abortion facilities like to give women to truly consider information. Many more stories on the lack of information given to women by abortion clinics can be found here.)

Time and again, NARAL and Hogue oppose common-sense laws on abortion that a majority of Americans support. Hogue has personally come against a federal law that would inform women that preborn children can scientifically feel pain by 20 weeks.

She has opposed ultrasound bills that would give women accurate medical information about their preborn child’s age and stage of development.

She opposes Women’s Right to Know Acts that give women the facts about what happens in an abortion. When Planned Parenthood employees are caught on tape lying to women about fetal development and the risks of abortion to women, Hogue and NARAL do not decry such deception and the hiding of factual information from women.

For all her bluff and blunder, Hogue actually does not believe in more information so women can make “informed decisions.” She merely believes in state-mandated abortion advertisements.