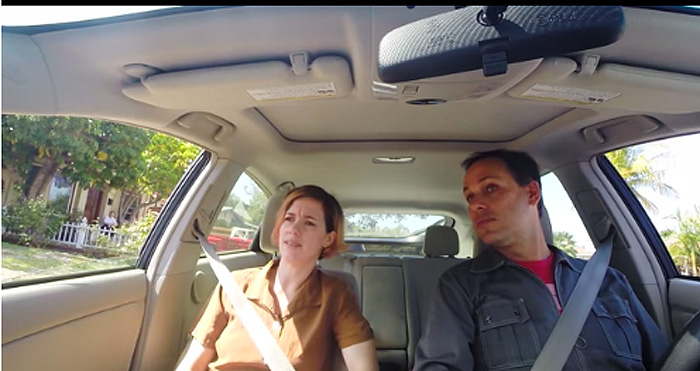 In the video, actors Alice Wetterlund and Nato Green (who are apparently comedians), head off to get an abortion. As they get ready to start their journey, they see a young child slapping his father. Wetterlund comments that she doesn’t want a child because “we don’t need more of this in the world,” referring to the child.

First, they drive to an abortion facility that is now closed; and then they mistake a pregnancy resource center for an abortion clinic. The woman volunteering at the pregnancy center tells them that at eight weeks the baby is able to recognize iPhone passwords. She also mocks Christianity and Jesus.

Finally, the pair find an abortion clinic, but they can’t actually get an abortion.

Contrary to NARAL’s misrepresentation, scheduling an abortion in the United States is quicker than scheduling most any other surgical procedure. A patient cannot walk into the doctor’s office and expect to get a tumor removed or a tooth extracted in a moment’s notice.

The duo is then shown a completely inaccurate photo of a baby at 15 weeks. Screenshot from the video. The abortionist tells them that each photo is of a preborn child at 15 weeks.

The video was meant to be funny; however, folks aren’t laughing. Pro-choicers and pro-lifers reacted with outrage that anyone would think abortion is funny.

That is the most disgusting thing I have ever seen.

@bayo0786 @heatherwilhelm I’m called a concern troll since I’m pro-choice, but often not pro-choice-organizations. This is how I got there.

“This was pretty awful in every way imaginable — a deeply serious topic no matter which side of it one is on, reduced to several unfunny punchlines. I can only guess that NARAL was going for the boring-poem-about-bored effect, but they end up undermining their own argument. Repugnant and loopy.” – Whatswongnow

“Garbage. If your job was to swing a pro choice conservative immediately to team pro life, you were successful” – Ryan Williams

“This ad was put out by NARAL. As a person against abortion, thank you NARAL! This is the best commercial the anti-abortion people could ever have. Since you probably get government money and the anti- abortion side could probably not afford this, thank you for being so kind as to make this for them.” -Clyde Cavalieri

“Regardless where you stand on the issue – this just wasn’t even funny at all.” -EMoney012
“It doesn’t really matter which side of the issue you’re on. Abortion has never been, is not, and never will be “funny.” Much like the “comedians” in this video.” -Walter va Lille
“Dude, I don’t get how this is funny. I got a girl pregnant once. was irresponsible. it was a horrible thing that she got an abortion but I couldn’t handle having a kid at the time. but I did she’d some tears over it and seriously considered having the kid cause I didn’t want to hurt it and felt like I was killing a child. I’m sorry but I support woman being able to choose stuff with there bodies, that doesn’t mean it needs to be down played and made in to some meaningless thing.” -The Michael Anderson Show
Even those who still manage to be pro-abortion when technology allows us to see the child in the womb can see that this video is in extremely poor taste.