The campaign materials portray Govs. Scott Walker (R-Wis.), Rick Scott (R-Fla.) and Sam Brownback (R-Kan.) as being “obsessed with outlawing abortion” instead of focusing on jobs and the economy. NARAL’s materials describe the governors’ actions limiting reproductive rights, accompanied by photos of the governors’ heads with the word “abortion” splashed across their brains.

Because God forbid that any governor would act as though he governs in a civilized, humane country and attempt to save innocent human beings.

Where exactly did Ms. Bruce come by those numbers? Right…from two NARAL commissioned polls, one done nationally and the other in Kansas City.

From the national poll, here is the data for the three main choices:

A major problem with the poll (other than that it’s a NARAL poll and possibly biased) is that it didn’t provide the voters with the option to answer in ways that the majority of Americans believe.

For instance, according to a 2014 CNN poll, 58% of Americans believe that abortion should be illegal or restricted to a few situations. All bets are off that NARAL would call that “pro-choice.”

According to a 2013 HuffPost/YouGov poll, 59% of Americans “would favor sweeping new national restrictions on abortion after the 20th week of pregnancy” (when the unborn child can undoubtedly and scientifically feel pain), and only 30% would oppose such restrictions. 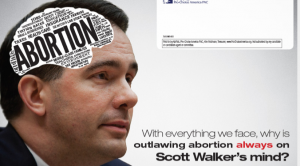 National polls have consistently shown that Americans overwhelmingly reject their taxpayer dollars funding abortions – whether through a health care plan or otherwise. These polls have been conducted by Rasmussen, Quinnipiac, and CNN.

No points to NARAL for its failure to ask accurate questions that reflect voters’ real viewpoints on abortion.

Let’s hear what NARAL objects to so strongly in the governors’ records:

But pro-life governors who also care about the lives of women are obviously outside NARAL’s contrived paradigm.