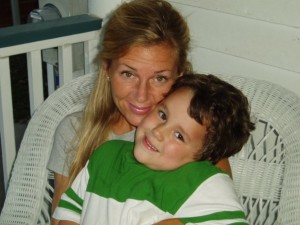 Meg and her son.

When Meg Perez was 18 years old and far from home with the military, she became pregnant. Having been raised Catholic and pro-life, she knew in her heart that abortion was not an option. So, she took an honorable discharge and made her way back home to be with her family for support. She decided that she would place her son for adoption and was blessed to find a Catholic adoption attorney who helped her find Catholic parents who would raise her child in the Church. The couple she chose were unable to have children, and Meg knew they were the right people to become her son’s parents. But letting go of her baby was extremely difficult.

“Looking back, during the pregnancy I really was kind of in denial,” says Meg, “I was just trying to get through it. I denied the fact that I really wanted to keep him because I knew in my heart I couldn’t be a good parent to him at 18. I knew that I would have to depend on my parents for help. There was a lot ahead of me and I was given the grace to be able to be mature beyond my years. I loved him more than I loved myself and that’s what adoption and being a parent is about.”

After she had her baby and he was with his adoptive parents, Meg decided she didn’t want more children. She continued on with her life, attending church weekly and working, but she wasn’t leading the life she felt God wanted her to. She drown her sorrows in alcohol and says she wasted a lot of years just lost, with no direction.  She tried to reach out to her son’s adoptive family through her attorney, but they denied the request.

“That was very hurtful to me,” she explains, “That fueled a lot of my anger and I floundered around for years. I suffered through an eating disorder. I had a very prayerful family and a good foundation of faith. It was a situation where I really suffered tremendously. It wasn’t a bad thing. It was redemptive pain. When you’re a confused young person and you have a hole in your heart, it’s tough to fill that.”

Meg went on to a career in TV news and eventually married. During her marriage she suffered four miscarriages, including one with twins. She now wanted children and she and her husband finally had a son, but their marriage ended abruptly after discovering what she describes as her husband’s lies and addictions. Meg and her son moved back to her hometown to start over, and a year later, at the age of 41, she became pregnant through a casual relationship. She was excited. She wanted her baby and her son wanted a sibling. But when she told the father, he said he wanted nothing to do with the child, would not stay with her, and would not help her financially or in any other way. Meg was devastated.

“The darkness that whispered in my ear told me the great lies,” explains Meg, “The lies of abortion. How it fixes everything. It will all go away. It’s best for your son. You can’t support two children as a single mom. You will have to quit your job that forces you to travel. I bought it all. Hook, line and sinker.”

The abortion itself was mentally, emotionally, and physically painful. Meg knew from the moment it started that it was wrong. The clinic was very cold. The abortionist had no bedside manner, even telling Meg to “shut up” when she moaned in pain. Meg recalls that there was no caring, no counseling, and the clinic workers moved the women in and out of the rooms like cattle. Despite the pain, Meg didn’t complain because she felt she deserved it. She sobbed all the way home and since then there has never been a day that has gone by that she hasn’t thought about her daughter.

Ashamed, Meg continued on with life, carrying the weight of the abortion regret with her. She continued to go to church and to pray, but could not bring herself to go to confession and ask for forgiveness.

But then, the father of her first son contacted her to tell her that he thought he had found their child whom she had placed for adoption. She wasn’t ready for it. She hadn’t planned on it, but now she was finally going to be able to meet her son.

“I wanted to meet him,” says Meg, “It was just over a year after the abortion though so I was not ready. But God has a plan and you gotta go with it, so I wasn’t gonna say no. My son is a wonderful person. His parents are awesome and were wonderful enough to tell him every day what a sacrifice I made for him. We keep in touch and see each other at Christmas. But, I was very saddened when I found out he is pro-abortion.”

Four years later, Meg found the courage to go to confession, saying that living with that sin on her heart for that long was not good. She was pushing down the pain and regret. She was struggling with an eating disorder. One day she decided that she wasn’t going to torment herself any longer. And once she did that, she was able to see the need to ask for the forgiveness for the abortion that finally brought her some peace.

Today, Meg is in a good place, a place of empowerment she says.

“The last thing off my list was to tell my parents [about the abortion]. It was very difficult,” says Meg, “They are very pro-life. My mother worked for Right to Life in Cincinnati. It was very hard to tell my mother. I wasn’t afraid that they wouldn’t love or respect me. I was more concerned that I would let them down. I feel that God is pushing me into speaking out about this and I didn’t want them to find out through the media. I feel like, once the shame is gone, there’s nowhere to hide. Embrace it or run as far away as you can. I am not okay with what I did, but I fully intend to make something good come out of my pain and my sin.”

Meg knows that she is in a unique position to help guide women who are facing unplanned pregnancies. Having chosen life for one child and death for another, she now knows for certain that there is only one choice, and that is life.

“The hardest things about the abortion, and they continue to be today, are, one, I was terrified that I wasn’t going to go to heaven and be with my other sons there and I would be separated from them forever. That mortified me. But there is forgiveness. The second thing is whenever I see a child even in a photo or in a movie, it breaks my heart. I missed that. I didn’t get that and it was my decision that has left me without that. I pray to God and my daughter all the time for forgiveness.”

Meg wants women considering abortion to open their hearts to God and Jesus. She advises them to think about what their life would be like without that child in ten years, and what it would be like with that child. She says to talk to people like her, who have chosen both life and death for their children, and to know that:

Your decision doesn’t just affect you, it affects everyone around you. At the end of your life you’re held responsible for whatever damage you’ve done to other people. People think that abortion is a personal decision. And it’s not. I don’t look forward to telling my son, who is 9 now, about this. That he had another sibling. Because he really wanted one. You don’t have any idea what your life is going to be in 10 years. I’m sure that my parents are saddened and grieving that they have another grandchild that they will never know. Abortion is a decision that you will never be glad you did. It will be regretful. I hear women say that they are glad they had an abortion. They aren’t being truthful with themselves. [If you’re considering abortion] pray for selflessness. It will all work out.