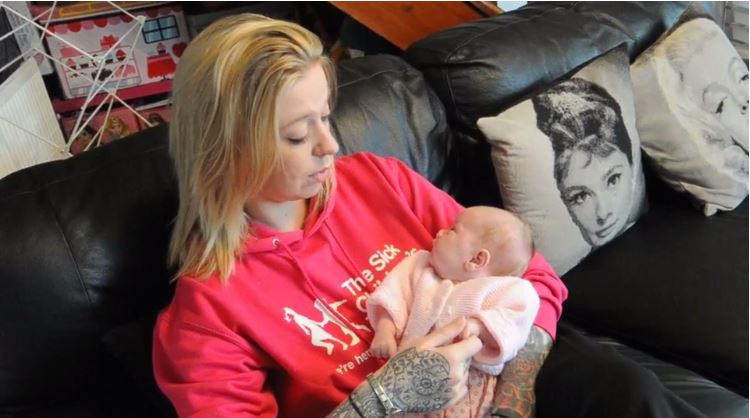 Lisa Ambler and her husband Michael had struggled to conceive a child for years before they decided to use IVF to become pregnant with their daughter Faith-Rose. Soon after, their second attempt at IVF failed and they decided not to try again. Then, against all odds, they became pregnant naturally with a baby girl.

But with the joyous news soon came devastation as doctors discovered that the preborn baby girl, whom they had named Lacey-Janet, had hypoplastic left heart syndrome, a condition in which the left lower chamber of the heart doesn’t develop or work correctly.

“When we were told the problems with Lacey-Janet’s heart we were told to abort but for me it was all a big dream,” Ambler told Hull Daily Mail. “I was almost waiting for something to go wrong because I didn’t think I would be lucky enough to get pregnant again. They kept saying that she wasn’t going to live long but we were never going to abort her because she wasn’t supposed to be here anyway.”

When preborn children face a diagnosis such as a heart condition, it is usually discovered during an ultrasound near the end of the second trimester. Former abortionist Dr. Anthony Levatino explains what occurs during an abortion after 24 weeks gestation:

Told that Lacey-Janet wasn’t likely to survive (and if she did it would only be until she reached a certain age), her parents ignored the doctors’ advice to abort. Lacey-Janet was born August 14, 2017, weighing six pounds and 10 ounces.

After just a few days, her heart began to deteriorate and doctors decided to perform open heart surgery on the tiny girl in order to save her life.

“Doctors were contemplating taking the left ventricle out and pumping through the right ventricle but that would have given her a life expectancy of teens to 20s so she would have had a really short life,” said Ambler. “She had two holes in her heart that were not detected on the scan so they closed the biggest hole and said that the smallest hole should close itself over time.”

Lacey-Janet’s surgery took eight hours and was successful, although she needed to be on life support after it was complete. Once she had improved, doctors moved her out of intensive care. But then what Ambler calls “the scariest” moment happened while she was trying to breastfeed Lacey-Janet.

“I was really nervous as this was the first time I had properly fed her since she’d had surgery,” explained Ambler. “I put her to my breast and she was feeding fine but then all of a sudden she became really tired and started gasping for breath. I shouted to the nurses who came running across and put her on the bed so that she could be resuscitated and brought back to life. That for me was the scariest thing that happened because I was holding her and I felt like that was my fault.”

Lacey-Janet had aspirated while eating and her lungs collapsed. Doctors took her back into surgery and she was placed on life-support. She began having seizures. Her brain scans are now clear and according to Ambler, Lacey-Janet is doing “amazing.” She will need to be followed by a cardiologist throughout her life and there is still a slight narrowing of her left ventricle that could need surgery down the road.

Her parents say they would “never say never” to another pregnancy but they are focused on caring for Lacey-Janet and her big sister at the moment. They also want other families facing similar situations to know that abortion is not the answer.

“We want to make awareness as well for people that are told to abort the babies and pressured into not keeping them and Lacey is one of the living proof children that prove they can get through it and they’re stronger than we give them credit for,” Ambler said in a video.