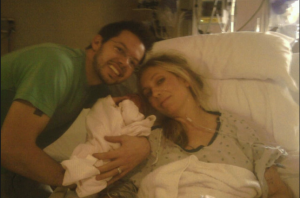 Melanie Pritchard was as prepared as you can be to deliver her second baby. When she was pregnant with her first she had done all the research necessary to find a pro-life OB/GYN and drove 25 minutes of her way just to see that doctor. Her unborn child’s life was of the highest value to her, and she wanted to ensure that her doctor felt the same way. It turned out to be one of the best and most important decisions of her life.

In a blog post for Life Site News, Melanie recounts the day she died with her daughter still inside of her. She has no memories of the frightening events that took place, so she relies on the details she learned from her husband and doctors.

According to those present, Melanie was in labor and delivery when she began to feel light-headed and nauseous. Her vitals were stable, but while the nurse began trying to figure out what was happening, Melanie slumped over. Her husband, Doug, recalls that she turned blue and her heart rate and blood pressure dropped to zero on the monitors. Their unborn baby’s heart rate dropped as well. Melanie had gone into cardiac arrest and was clinically dead.

What happened next was a whirlwind, and Doug turned to God for help, praying:

God, I know that this is more than I can handle, which means you have a plan and a purpose in this, and I trust you; but please, if it is your will, allow me to hold my wife again.

As Melanie was wheeled to the operating room, family and friends began gathering to pray. They took to social media, texting, emailing, Tweeting and posting on Facebook to ask for prayers for Melanie and her baby. Melanie says that by the end of the day, she was the top person searched on Google in Phoenix, and one of the top 100 people talked about on Twitter. Prayer requests for her and her baby had gone viral.

While some doctors and hospitals may have focused their attention on ensuring Melanie was saved, Melanie had chosen a doctor and hospital that she knew would be focused on saving both her life and her baby’s. Both mother and daughter made it through the emergency C-section. Their daughter was named Gabriella, meaning heroine of God.

Melanie writes that a nurse at the hospital soon gave Doug the news that after trying to resuscitate Melanie for an hour and a half, they were only able to get a faint heartbeat and she had been without oxygen or a pulse for ten minutes. Doctors told Doug and the family members that Melanie was not likely to survive as she had suffered an amniotic fluid embolism, a condition that is most often fatal.

That prediction seemed to be coming true as Melanie experienced erratic blood clotting. Doctors had accidentally severed an artery during the C-section and her abdomen was filled with blood. Miraculously, she pulled through her second emergency surgery, but her heart was not strong and she was completely dependent on a respirator to breath. Doug was told that if Melanie did happen to survive, she would likely be neurologically impaired. She was transferred to a different hospital with equipment that would better support her.

At this new hospital, Melanie underwent a third surgery to remove the packing that had been placed in her abdomen during the second surgery. Before she went to the OR, she gave Doug a glimpse of hope when she opened her eyes and spoke to him. After seeing a photo of Gabriella, she even attempted to get out of bed. Doug knew that his wife was not impaired and though Melanie’s chances of survival were still low, he had reason to believe that she would be okay.

Miraculously, within a day of that surgery, Melanie was off the ventilator and breathing on her own. She praises God for pulling her through and is forever grateful to the doctors who saved both her and Gabriella.

While it can be difficult to find a pro-life OB/GYN who is local, Melanie’s story proves that it may just be vital to your baby’s health and life to ensure that you search for one. Try searching with the American Association of Prolife Obstetricians and Gynecologists. If you still aren’t able to find one, make sure your doctor knows that if anything is to happen to you, you want your unborn child’s life to be fought for and valued as much as your own.