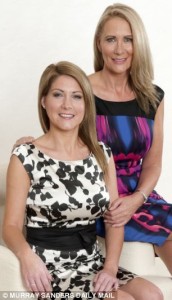 Jennie and Debby. From Daily Mail.

As written for the Daily Mail Online, when Jennie was just six weeks old, her mother Debby was told that her daughter had cystic fibrosis and likely wouldn’t live to see her fifteenth birthday. Debby, just 18 at the time, was devastated, as any parent would be. She spent the next two years in a depression, crying daily, worried for her daughter’s health and future. But then, she decided that her daughter needed for her to be strong, and she picked herself up, vowing to help Jennie live every day like it was her last.

That’s one of the hidden blessings of CF – it causes you to focus on what matters, and to enjoy each moment. None of us knows how long we are given to live, but with a diagnosis like CF, that reality becomes much clearer. However, there’s a fine line between living every moment waiting to die and living every moment with the will to fight. There’s a difference between telling your child she will die from this condition and telling your child that she might die from it but that you are going to fight for her life right beside her. And that fine line is the value that we give the lives of others and that we teach them to have for themselves.

Unfortunately, some parents don’t place value on a life lived with CF. For them, life with an illness translates to a life that isn’t worth the suffering – isn’t worth living.

Debby tells the Daily Mail Online that at age nine, Jennie told her that she knew she was going to die from CF. Debby says that she simply could not “disagree” with her daughter; she could not “lie” to her. Then, at age eleven, Jennie wrote her will, as if, even at such a young age, she had no hope of living and no self-worth to fight.

It isn’t a lie to tell your scared nine-year-old child that while CF could likely kill her, there’s no way of knowing for sure if it will. There is so much bigger of an opportunity here than to avoid “lying” to your child. You can talk to your child about how hard you are willing to fight to make sure she lives long and healthy. You can tell her about the money you are working so hard to raise to find a cure, if that’s indeed what you’re doing. You can focus so much more on what CF has given than on what CF has taken. You can give your child hope, tell her that her life is worth fighting for.

Thanks to the hard work and dedication of CF researchers and parents, Jennie has turned 30, living twice as long as doctors had predicted. And though Debby and Jennie celebrate this milestone with what they coined a “double your sell-by date” party, they continue to focus on Jennie’s death.

And then comes the moment when Debby agrees to help Jennie kill herself.

Debbie recalls the moment the question was asked:

If I have no quality of life when I turn 40, I would like to go to the DIGNITAS clinic and end my life. Will you help me, Mum?

Debby admits that this was a tough decision for her due to its moral, ethical, and legal implications. But she decides to tell her daughter that yes, she will help her commit suicide. Jennie is worried that she won’t be able to afford it, so Debby steps up. She writes:

Without hesitation, I told her that I will do anything within my power, sell my house if needs be, to help end her suffering if it has become intolerable.

It all comes down to value.

This story is reminiscent of that of post-abortive mother Addie Morfoot, who aborted her daughter after a prenatal diagnosis of CF. A negative attitude about life with CF killed Addie’s daughter Annie in the womb and is killing Jennie even as she continues to live.

Meanwhile, moms like Janet Murnaghan are changing laws and moving mountains to save their children with CF. Earlier this year, Janet was watching her 10-year-old daughter die from CF while awaiting a lung transplant. Rather than give up, Janet fought the system, helping to (at least temporarily) change laws allowing not only her child, but other children to be put on the adult waiting list, increasing their odds of getting that life-saving transplant. Sarah had been waiting for 18 months on the list for children, even in the number-one spot. She had just weeks left to live when her mother made headlines, got the law changed, got Sarah moved to the adult list, and got that transplant. Children like Sarah fight their way through lung transplants and rehabilitation because they have the will to live, as their parents instilled in them. Their parents gave their lives value, and so these children value themselves.

In fact, the day before Jennie’s story was printed, ABC aired the story of another young woman with CF named Lyndsey McLaughlin, who fought for her life because of her family – because her family needs her and loves her, and therefore she loves herself. Because of that will to fight, Lyndsey is now living healthier and stronger as she surfs, goes snorkeling, and thrives.

It isn’t the cards we are dealt that determine the outcome of our lives. It’s the value that we place on ourselves and others place on us that determine if and how we live.

As the mother of a child with CF, knowing that up to 90% of unborn babies diagnosed with CF are aborted, knowing that everything I say and do affects how my daughter views CF and views herself, I aim to teach her that everyone has differences and everyone has struggles, but everyone’s life has value, including hers. And so does Jennie’s.