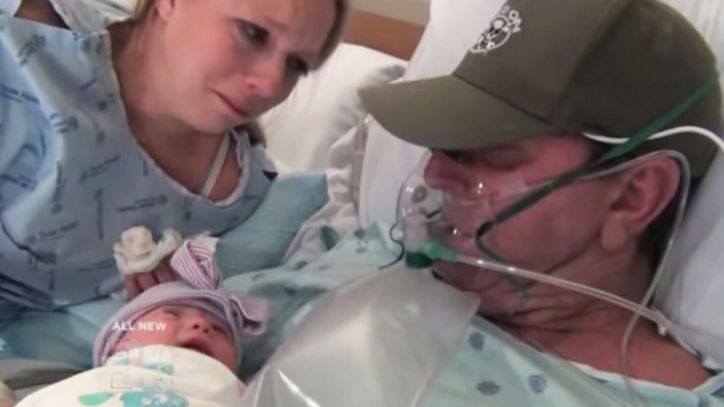 For 45 minutes, Mark Aulger held his newborn baby girl Savannah. That snapshot of that moment is the one photo that the now nearly eight-year-old Savannah has with her father, who slipped into a coma the day after her birth and died just a few days later. It was unexpected devastation to a family who had been given renewed hope just a month earlier.

In December 2011, Mark Aulger, 52, learned that after eight months of chemotherapy, he was cancer-free. Diane Aulger was pregnant with their fifth child and Christmas that year was full of joy. The new year, however, brought heartbreaking news. On January 3, 2012, Mark was admitted to the hospital and diagnosed with pulmonary fibrosis – a result of chemotherapy.

“We thought he could get on steroid treatment and oxygen and live for years,” Diane told ABC News. But that wasn’t the case. By January 16th, it became obvious that the treatments weren’t working and Mark was given just one week to live.

“He was awake and alert, himself. I really didn’t believe the doctor,” said Diane. “The next day his doctor came in and said: ‘When are you going to have this baby?'”

Diane and her doctors made the decision to induce labor two weeks early to ensure that father and daughter would get to meet at least one time. On January 18, with Mark in a bed nearby, Diane gave birth to baby Savannah.

“The day she was born his oxygen levels were really high,” said Diane. “He held her for 45 minutes. Him and I just cried the whole time.”

The following day, Mark attempted to hold his daughter again, but after only a minute, he could no longer hold on. He went into a coma.

“If she cried, he would shake his head and moan,” explained Diane. “I put her on him when he was in a the coma a few times and his hand would move toward her.”

On January 23, Mark died. His memory lives on with his children who still tell jokes and laugh just as he had always done with them.

According to the Huffington Post, when the news broke about Mark’s death, donations and support began to flood in for the family. They received cards, baby supplies, a donation that allowed them to buy a minivan, and thousands of dollars. It helped the family to be able to pick up the pieces of their broken hearts and move forward.

“I’ve received some other cards from perfect strangers with, you know, $100 or $200. That was shocking enough,” said Diane. “But enough money to get myself a minivan was – I’m shocked still.”

Despite all of the challenges Diane faced with the birth of her baby girl and the death of her husband within the same week, she had hope because the community rallied around her. Supporting women and their children is how hearts and minds will finally turn away from abortion. It’s obvious Mark loved his baby girl, even before she was born, for Diane to go to such an extent to make sure he could hold her and see her if only one time before he died.