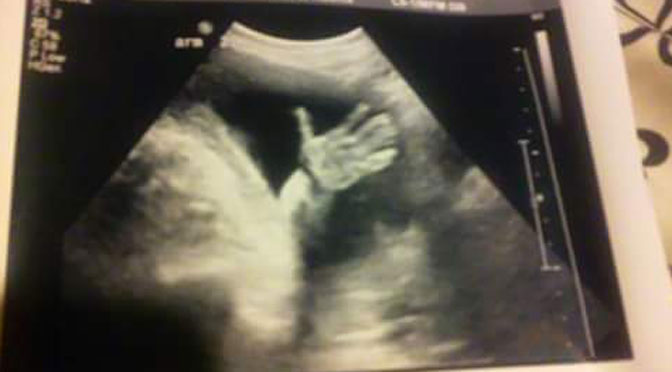 Amy Jedrysek shared an ultrasound image of her baby on Facebook because she saw an opportunity to show people that a preborn child is not just tissue. In the image, her baby is waving as if to say, “Hi, Mom.”  Now Jedrysek has shared a bit more of her story of single parenthood and finding support.

“I believe that there can always be another way for women who feel that they cannot parent or who are afraid to,” said Jedrysek. “I have had experience with this, in fact, I became pregnant at a time in my life when some people would’ve told me to have an abortion. Single and afraid and just not knowing. But I found support. Some in my own family and some outside my family.”

Jedrysek also shared that a close family member went through the process of placing a baby for adoption. She calls it “the hardest thing that my family has gone through.” However, they could always see the positives. Amy and her son shortly after his birth. Image courtesy of Amy Jedrysek.

“[…] Through the pain that my family went through, we also saw tears of both compassion and empathy for my family, and at the same time, tears of joy and love in the eyes of the family that we were giving this beautiful baby to,” she explained. “Even with the pain we went through in placing this child for adoption, nothing would be worse than the pain of this child’s mother having aborted him. Nothing would have been worse than that.”

When she shared the image of her son waving she shared a message about how children at 20 weeks gestation — like her son, at the time — can still be aborted for any reason. She noted that this is also the time when mothers can really feel their baby moving around. Amy’s ultrasound image of her son waving. Image via Facebook.

“Look at this picture of my son’s little hand,” says Jedrysek. “He is a human being now that he is a 7-month-old chubby faced baby, and he was a human being, waving to his mom, in this picture while he was safe in my body. Please find another way. Abortion kills the most innocent of human beings.”