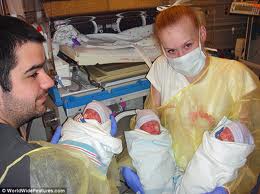 Kandace Bowers, the mother with cystic fibrosis, who risked her life and defied doctors by refusing to terminate her triplets, has died.

Pregnancy puts pressure on anyone’s lungs, but when you are living with a chronic genetic condition that leaves you with countless lung infections and poor lung function, it can be much, much more difficult. Bowers and her then finance (now her widower), Steven were in complete shock when they found out about the pregnancy. People with cystic fibrosis have a difficult time absorbing food and therefore gaining weight, and at age 20 Kandace only weighed about 87 pounds. Thick mucus throughout the body can also make it difficult for women with cystic fibrosis to conceive. She simply didn’t think it would be possible for her to become pregnant. But after that initial shock wore off, the couple was even more surprised when the doctors told them they were having twins. And then, at another ultrasound, they spotted baby number 3. 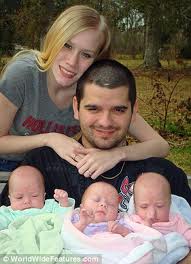 “My husband actually fell against the door and he almost passed out. I was actually not believing that there was actually three,” she told Eyewitness News.

Doctors told Kandace that they didn’t think her body could support the pregnancy and they weren’t sure she would survive it. They advised her to terminate. She refused.

“I knew that it was going to be difficult and risky for me, but I wanted to take that risk. I had never thought it was possible that I could ever be a mom, so I wanted to have that chance. I was determined,” she told the UKs Daily Mail newspaper.

And was she ever.

Kandace fought cystic fibrosis and carried her girls to 28 weeks gestation, which is when her health took a turn.  The doctors performed an emergency C-section in an attempt to save Kandace and all three of her girls. It was a success. In the fall of 2010, the identical triplets, Brooklyn, Savannah, and Dakota were all born healthy, weighing in at around two pounds each and breathing on their own. 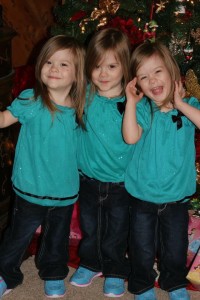 The Bowers triplets at age 3.

In January 2011, the girls were able to go home. Kandace and Steven had much reason to celebrate. And doctors planned to write about her story in scientific journals.

But cystic fibrosis is progressive. A person born today with cystic fibrosis only has a 50/50 chance of living to see age 40. Some people with CF have been blessed enough to reach age 50 or 60 while others have recently passed away as young as age 9.

Kandace was 20 years old when she heroically put her life on the line for her girls, and now just 3 and a half years later, she is being laid to rest. She didn’t see her bravery as anything extraordinary. She simply loved her babies, telling the Daily Mail:

It has been the hardest fight of my life – but it has been worth every second. I would have died for my girls if I’d had to.