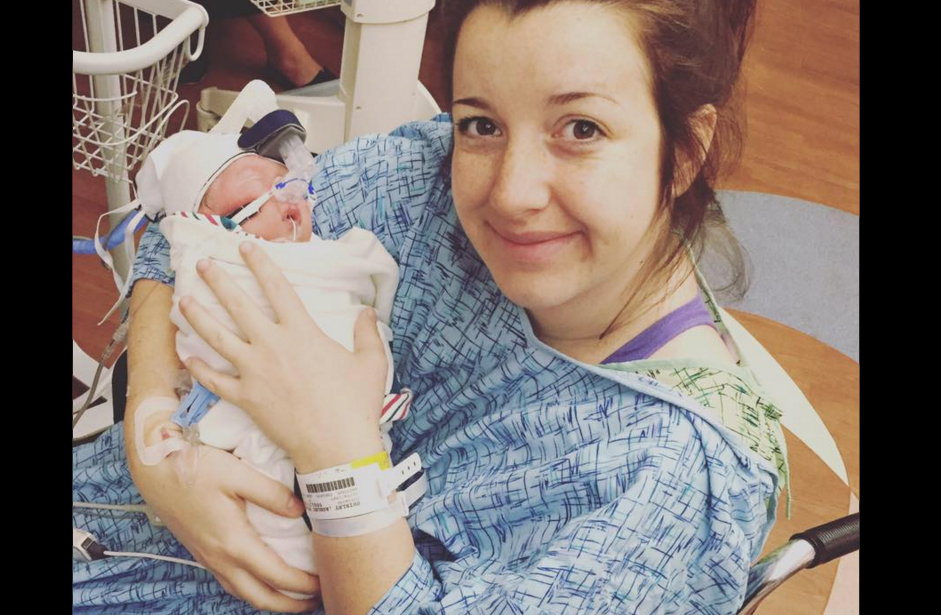 Ashley Shirley and her husband, Ronnie, were excited to be expecting their fourth baby. Already parents to Lilly, 5, Londyn, 3, and Jaxson, 1, they were happy to be welcoming another little one into the bunch. However, that joy quickly turned to fear when at their 20-week ultrasound, doctors suspected something was wrong with the baby.

At a follow-up ultrasound at 24 weeks, doctors delivered some heartbreaking news: their baby girl, Jocelyn, was diagnosed with skeletal dysplasia, a condition also known as dwarfism, which can come with varying complications.

“When Jocelyn was diagnosed with skeletal dysplasia, we were initially told it looked to be non-lethal, as her chest cavity looked pretty normal and there were no other red flags,” explained Shirley. “Her femur bones were bowed, and her arms and legs measured three to four weeks behind the rest of her body. The Corpus Callosum (the front-middle portion of the brain) was completely missing, and she had hydrocephalus (fluid on the brain). At that point the doctor gave the option to abort. It shocked me at how little had to be wrong for them to even offer that.”

Shirley said it “broke my heart” when doctors suggested abortion, because it was never an option for them. Abortion was brought up a few times after that, but they continued to refuse. The couple planned to trust God, and as the weeks went on, they noticed changes occurring on the ultrasounds.

“As she grew, her chest did not,” said Shirley. “Her heart eventually took up over half her chest, leaving virtually no room for her lungs to grow and mature. That’s when they told us they didn’t know if she would come out breathing or not.”

“I sat many days and just wondered why this was happening. I would pray in my mind, but couldn’t open my mouth to pray. I couldn’t open my Bible. I was just emotionally and mentally drained,” she said.

The devastating diagnosis of death for her daughter continued through the rest of the pregnancy. The couple called in a photographer to be there at Jocelyn’s birth to take, what they thought, would be the only photos of her. But July 7th, when the day of her birth arrived, Jocelyn shocked everyone.

“The neonatologist said, ‘I came to this delivery expecting a very abnormal and sick baby, but she looks normal!’ They could not explain it. I tell them all ‘it’s a miracle!!’ Not something you can explain with science,” said Shirley. “When I heard her scream from behind the curtain, my heart exploded. My husband and I wept together, thanking God!!! I was in shock at that goodness of God.”

The photographer who had come to take pictures of a baby’s birth and death could barely contain her excitement.

“I wept tears of joy,” Jennifer Wilkerson of Wilkerson Photography wrote on Facebook. “I ran over to mom and started showing her the pictures of the baby and saying, ‘I think she’s okay,’ and mom is crying and we are all crying… full testing showed the part of her brain that was showing absent was now there; the limbs that were bowed and short were now straight and full; there was no fluid on her brain, and her chest cavity, which had been deemed too small to support life, looked normal from the outside.”

After a stay in the neonatal intensive care unit, Jocelyn was sent home with her family. While her story is indeed miraculous, she still faces some challenges. Her parents recently found out that she is blind. Her retinas never completely formed or attached as they should have. She uses a G-tube to ensure proper nutrition and growth, but is steadily working on improving her oral feeds. She has doctor appointments three or four times a week.

Shirley says life has been crazy since the day Jocelyn was born. Between driving her five-year-old to kindergarten, housework, feeding Jocelyn with her tube and cleaning it every three hours, she also serves as a youth pastor at their church. Shirley says she often feels like she is pulled in 1,000 different directions.

“By the grace of God, I’m doing it. I get through each day knowing how blessed I am to have this crazy, but wonderful life. And I wouldn’t change a thing,” she said.

The couple never told their older children about Jocelyn’s diagnosis, and they are glad they didn’t, as it would have caused them unnecessary stress. Her big siblings adore Jocelyn, Shirley said. They are gentle and loving, and even one-year-old Jaxon can’t seem to get enough of her.