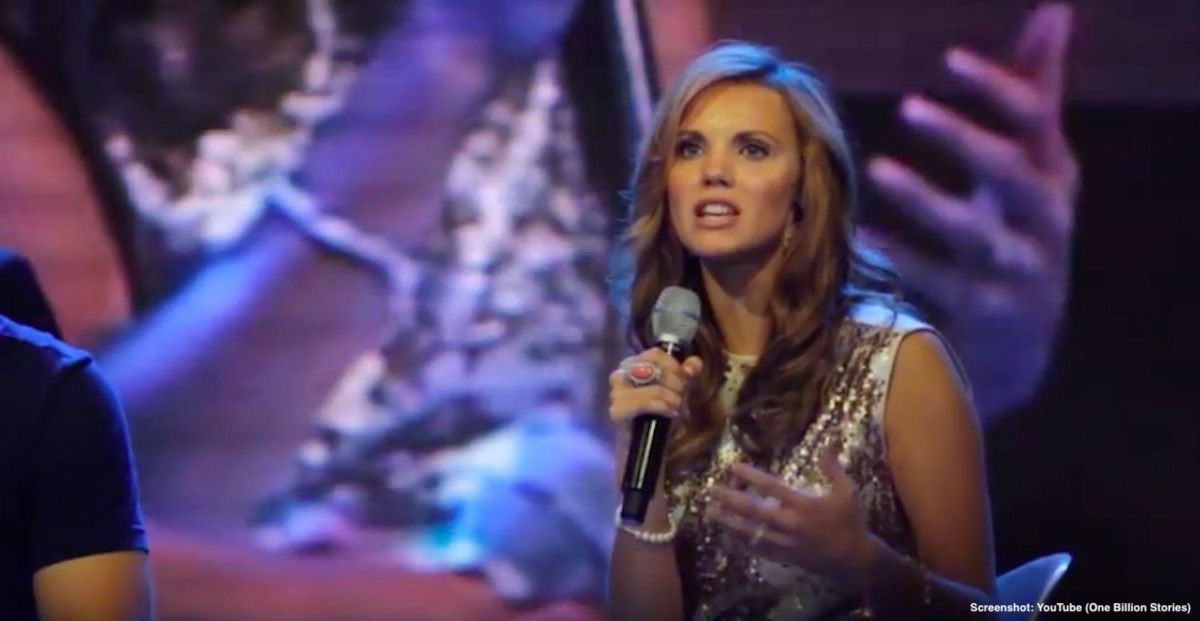 (Life Site News) After Michelle Williams used her award acceptance speech to promote abortion at the Golden Globes on Sunday, a Catholic model in labor took the time to record an Instagram video challenging Williams’ statement that abortion was integral to her success as an actress.

“I’m here getting ready to deliver my fifth baby,” said Leah Darrow, a former contestant on America’s Next Top Model, from her hospital bed. “And I want to let all you women know, all you young ladies who haven’t had babies or are maybe listening to what the culture says about birth, and women, and babies, and choice.”

“Babies don’t keep us from our dreams,” she declared.

“I’m getting ready to deliver a baby that will not keep me from my professional growth, but will make me better because of it,” she continued. “And I’m so honored and excited, and I can’t wait to have this baby.”

Well, this for sure wasn’t planned but I felt called to share so here’s the truth… New life never keeps us from our dreams. One of the cruelest lies that the Devil tells women is that we aren’t brave or strong enough to do what God invites us into when we bring life into the world. New life is always a gift. And I’m humbled that I get to receive this new life AND live out the *abundant* life the Lord created me for. Please share this message with the ladies in your life because women deserve a better narrative than what the culture gives us. We deserve to believe that life really *can* be this good, and that receiving new life is always, always, always pure gift. I’m lifting you up through this labor and please pray for me!! Can’t wait to have this baby!! 👶💖 #prolife #CatholicWomanhood #mama #babyscoming #michellewilliams #goldenglobes2020 #goldenglobes2019 #acceptancespeech

Darrow wasn’t the only one who took to social media to push back against Williams’ Golden Globe speech in which she hinted that having an abortion enabled her to succeed professionally.

“How sad it must be to trade an innocent human life for a tiny golden statue. Praying for Michelle Williams,” tweeted Abby Johnson, the former Planned Parenthood director whose conversion to pro-life activism is depicted in the film Unplanned, drawing a comparison that many others did as well.

How sad it must be to trade an innocent human life for a tiny golden statue. Praying for Michelle Williams.

“Only in Hollywood are you able to announce that you murdered a baby in exchange for a hunk of metal with your name on it and have the crowd cheer for you,” said Elizabeth Fortmeyer in a video she posted on Twitter.

“Abortion is not birth control. Abortion is premeditated murder of an innocent child, depriving them of their right to life,” she continued.

“As a woman, I am sick of this belief that all women should be okay with murdering their children for personal gain,” said Fortmeyer. “Real women are pro-life.”

Yesterday, Michelle Williams accredited ABORTION for her Golden Globe, and suggested that all women should be in favor of it.

As a woman, I am sick of this belief that all women should be okay with murdering their children for personal gain.

Sara Gonzales asked those in the audience who applauded Michelle Williams’ pro-abortion speech, “Why are they clapping? You’re clapping for dead babies. Stop!”

“Only in Hollywood can you get [cheers] for telling the crowd that you traded a baby for an award,” said Gonzales. “That a piece of metal is infinitely better than the tiny human life that you created inside you. That the fancy gown and the jewelry that you’re wearing is way more important than your own flesh and blood.”

“Hollywood, you all are messed up,” she added.

Michelle Williams proudly thanked her abortion for her Golden Globe…WHAT is WRONG with these people?!pic.twitter.com/hRtTZ4gFqb

“Michelle Williams, while visibly pregnant, claims she wouldn’t have won her Golden Globe Award if she didn’t kill her previous child,” tweeted Live Action Founder and President Lila Rose, who gave birth to her first child days ago.

“No trophy is worth more than a child’s life,” said Rose. “Sacrificing our children to pursue our dreams is the total antithesis of women’s empowerment.”

Michelle Williams, while visibly pregnant, claims she wouldn't have won her #GoldenGlobes Award if she didn't kill her previous child.

No trophy is worth more than a child's life.

Sacrificing our children to pursue our dreams is the total antithesis of women's empowerment. pic.twitter.com/McGZDEVmo5

This is survival of the fittest:
I’m big-You’re small.
I’m strong-You’re weak, and you’re standing between me and my “success.”
Humans were made for more than this. But when we abandon God, we applaud as we return to acting like animals on a Savannah. https://t.co/8wgbIXoNDq

Michelle Williams' little speech and the crowd's drearily predictable–nearly Pavlovian–response crystallized the self-focus, shallowness, narrowness of vision, insularity, parochialism, and groupthink of the celebrity culture. There it was, on full display, for all to see. https://t.co/bMm2HDwMpG

“Dear Michelle Williams,” wrote Kristan Mercer Hawkins, President of Students for Life, on Facebook: “Your remarks at the Golden Globes were heartbreaking. Like many post-abortive mothers, you disguised your hurt with a political speech to seek absolution from the world for your past abortion decision(s). It’s so sad that you credit an act of violence, abortion, for your career success. The second wave of Feminism has clearly failed as millions of women like you have been deceived into believing that you must kill another in order to succeed in your career.”

“Abortion is the opposite of female empowerment,” said Hawkins. “An abortion says you thought you weren’t strong enough to achieve your goals and care for the new human you created. It’s the pro-life movement that seeks the full empowerment of women, showing women they are superheroes and can do both.”

Joy Pullman, writing at The Federalist, explained what Williams got wrong in her speech:

Chiefly, it’s the underlying idea that human lives are a worthy trade-off for career achievement. If someone put a gun to a child’s head on the Golden Globes stage and said to Williams, “You can have your award, but the price is this child’s life,” hopefully she would have said “F— that award, save the child.” But here she is on a global stage, not only admitting that she has already done essentially the same thing to an even smaller human, but also encouraging other girls and women to do likewise — to repeated Hollywood applause.

I can think of few stronger expressions of moral corruption than “This child must die so I can live as I please.” Yet this is the tradeoff we are constantly told epitomizes women’s empowerment. Bunk. What does it profit a woman to gain a major industry award if the price is the life of an innocent child? What kind of “success” is it to rise at the cost of other people’s existence? What kind of society encourages people to think and live this way? A sick, self-cannibalizing one.

National Review’s Alexandra DeSanctis took Williams to task for couching her message in terms of “a woman’s right to choose” rather than speaking straightforwardly about abortion.

No one disagrees that women have the right to make their own choices. The abortion debate exists not because a large faction believes women should be deprived of the “right to choose” but rather because of the choice in question: to end the life of a distinct human being. Abortion-rights supporters such as Williams aren’t part of the debate at all because they are intentionally deceptive about the heart of the argument. And who can blame them? It’s far easier to issue euphemistic speeches about women’s empowerment to thunderous applause than it is to defend the taking of an innocent human life.”

A man who wishes to remain anonymous remarked to LifeSiteNews:

I wonder if a day will come when Williams will look at this worthless Golden Globe trophy she’s holding and wish she were cradling her missing child instead.