Planned Parenthood’s recent “overly political” presentation at a recent youth leadership symposium in Worcester, Massachusetts has come under such fire that the director of the city’s Youth Services Division, Raquel Castro-Corazzini, said it “was a mistake and the result of a miscommunication … the presentation was removed and discontinued from the overall curriculum as soon as we learned about its political advocacy content,” South Coast Today reports.

While the specifics of what was said by the abortion profiteer at the summer training are still in question, it seemed to be related to an ongoing debate in the city’s schools over the use of Planned Parenthood’s sex education curriculum, which was up for debate, but did not pass this year.

The paper reports that the political part of the presentation was about “the need for a comprehensive sex education curriculum in the Worcester schools,” and that in the meeting, “Planned Parenthood’s presentation reportedly encouraged students to advocate to the School Committee for the comprehensive curriculum the organization supports.”

While the abortion giant declared it was “proud to partner” with Worcester the next day, not everyone shared that sense of pride.

“I think it’s propaganda,” committee member Dianna Biancheria said of Planned Parenthood’s presentation. “It should have been reviewed prior to being brought to the students.”

“I’m livid,” said her fellow committee member John Monfredo. “No School Committee members are opposed to sex ed … but it has to be age appropriate. Folks misrepresenting what we said is appalling.”

The battle for sex education in Worcester goes back to some contentious school board meetings. In December of last year, the New Boston Post reported that “parents and students clashed over a so-called comprehensive sex education curriculum for middle school students” at a board meeting; at issue was the Planned Parenthood-sponsored curriculum Making Proud Choices! This curriculum is published by a Planned Parenthood-affiliated publisher, as Live Action News has previously reported. Although the sex ed curriculums published by ETR all have different names and nuances, they often share similar phrases as to what they do. Making Proud Choices! is no different:

On its curriculum page, there are varying tables of contents for the same course, including the “original” and the “School Edition,” but after listing all the variances, at the end, the summaries are still the same:

The focus on condoms may be one of the keys that has made some Worcester parents and stakeholders uncomfortable. Such was the case with, Mary Mullaney, as reported in the Worcester Telegram last December. Mullaney, reportedly a school district mom and former School Committee member, “objected specifically to what she considered the program’s endorsement of sexual concepts that are inappropriate for middle school students. If her kids had been learning in their classes about fun ways to use condoms, ‘they would have been pulled out of the public schools so fast, your head would spin,’ she said.”

Yet right there on the ETR page promoting Making Proud Choices are myriad condom comments, promises of instructions on their use, and this advertisement link for the Condom Educator Kit. 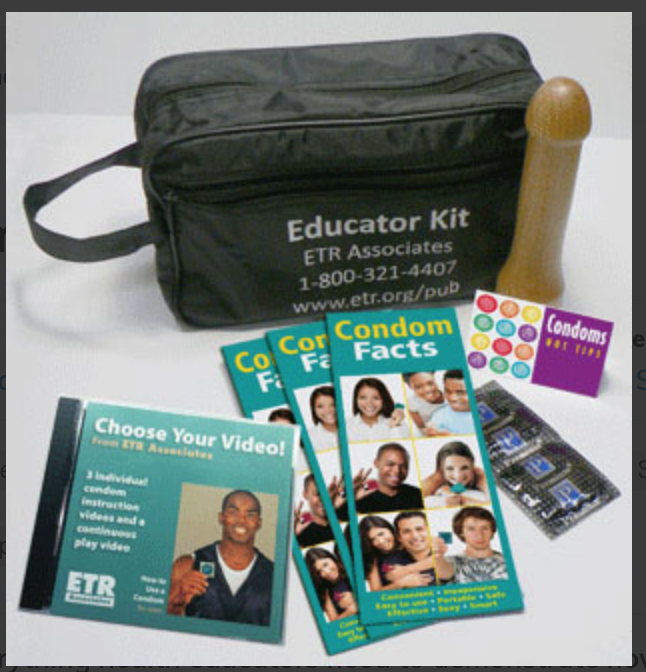 Despite the contention between parents who disagreed on the adoption of the curriculum (or its sibling curriculum, Get Real!, also debated), by the February meeting, a different health curriculum called the Michigan Model had been adopted and the Planned Parenthood curriculum debate had been tabled — at least until the state could release new health education standards later in the year. The decision, however temporary, was met with mixed reactions.

Given the contentious recent debate over sex ed curricula, it is understandable how one presentation in Worcester became front page news and left the city proclaiming it had allowed an overly political “mistake” to take place — especially since the presentation was supposed to be related to “preparing students for the workplace.” As South Coast Today reports:

Some School Committee members, meanwhile, were upset not just by the alleged content of the presentation, but that it was given at a city-run event geared toward preparing students for the workplace. According to the city, the Worcester Youth Development & Professional Leadership Symposium is intended to “provide training to summer employment participants on topics such as leadership, workforce development, financial literacy, communication, dependability, taking initiative and youth/family development.”

Castro-Corazzini of Worcester Youth Services noted in the Worcester Telegram that the city meeting was intended for job training for “15 college- and high school-age summer workers.” Planned Parenthood’s only comment on the controversy came from Jen Slonaker, Vice President of Education at the Planned Parenthood League of Massachusetts. Aside from stating Planned Parenthood was “proud to partner with the city” to help the “health and wellbeing of young people in Worcester,” she said, “We remain deeply committed to combating health disparities in Worcester, breaking down stigma around sexual health care, and ensuring access to medically accurate and inclusive sex education.”

Other than that, Planned Parenthood offered no explanation as to why it would hijack a youth employment training session to advocate for its preferred sex ed curriculum in the schools.